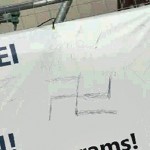 An investigation is underway after a sign in front of a Miami Beach synagogue was vandalized overnight. Police said they received a call just before 3 a.m. about someone spray painting graffiti on the sign located at the entrance to the Temple Emanu-El at 1701 Washington Avenue.

When officers arrived they found a swastika, the letters “KKK”, the number 33 and various words had been painted on the sign.

“My first feeling is one of shock, but I think more importantly disappointment,” said Rabbi Henry Abramson.

Surveillance video shows a man with a backpack walk up to the building and then goes out of view. A short time later a second person with a flash light appears on the video and it looks like he is saying something to the man wearing the back pack. The man with the back pack appears back on camera and then walks away.

Rabbi Marc Phillipe said this is not the first time something like this has happened at the temple.

“Two weeks ago, we had a hatred letter left in our restrooms and unfortunately the authorities didn’t think it was too serious, but it was obviouly serious becasue this happens two weeks later in the front of the synagogue,” said Phillipe.

This is the second incident where symbols of hate were scrawled on a Miami-Dade wall.

On Shabbos, September 6th, police said someone painted a cartoonish red “V” and “J” along with a swastika and letters KKK on the rear wall of a Publix grocery store at 9400 Harding Avenue in Surfside.

A red letter “V” and the swastika symbol were also painted on the street in the 9500 block of Bay Drive.

Roughly 20 miles away in West Miami, the same symbol of hate was lightly sketched into a wall of a Jewish temple at SW 8th street. The word “Iraq” was also scribbled above the swastika.