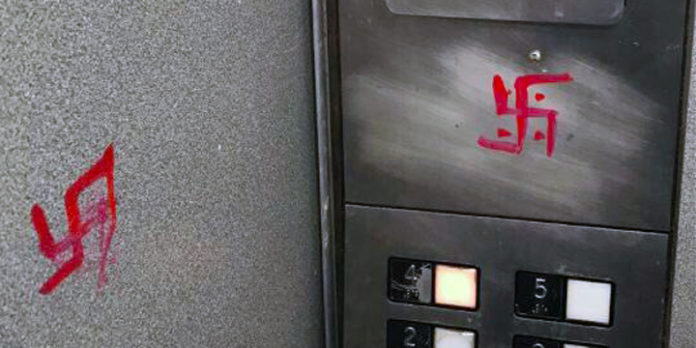 New Jersey is experiencing a “huge increase” in antisemitic activity and “every tool” needs to be used to combat the trend, the congressman representing the state’s 5th electoral district declared on Friday.

Democratic Rep. Josh Gottheimer was speaking on a conference call arranged to address a spate of swastika daubings and other antisemitic offenses in New Jersey public schools in recent weeks.

Highlighting the growing threat posed by white supremacist groups across the state, Gottheimer emphasized that his office was actively assisting security enhancement at religious institutions.

“We’re working together with our communities and our religious institutions by providing them with non-profit security grants,” Gottheimer said.

Grants of over $1 million this year have assisted synagogues, mosques, temples and other religious buildings with extra lighting, better locks and other safety measures.

In Bergen County, three incidents at public schools involving swastika daubings have been reported since May. In the most recent case, on Sept. 27, two swastikas were found in the boy’s bathroom of Glen Rock Middle School. School officials shut down the bathroom and reported the incident to police.

Speaking on the same call as Gottheimer, Evan Bernstein — New Jersey regional director for the Anti-Defamation League (ADL) — also underlined the challenges posed in the state’s public schools over combating racism and antisemitism.

While the ADL continues to gather 2019’s data, “we know there is a huge problem,” he added.

According to the ADL’s 2018 audit, New Jersey registered the highest number of antisemitic offenses — 200 — behind only California with 341 and New York with 340.