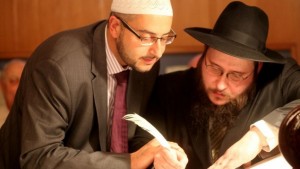 The following is from a report in Times of Israel:

In a first for Germany, and perhaps the world, a Muslim wrote one of the letters in a new Sefer Torah.

On November 29, the small Jewish community of Marburg, Germany celebrated the completion of the new scroll by holding a special ceremony and inviting dignitaries from the city to each write one of the 15 final letters of the Pentateuch. Among them was Dr. Bilal El-Zayat, an orthopedist at the University of Marburg and the leader of the city’s Muslim community.

“This was our second new Torah scroll after the Holocaust, and it was also the 10th anniversary of our synagogue building, so we were celebrating everything together,” said Monika Bunk, vice president of the Jüdische Gemeinde Marburg.

Bunk said that the idea to honor Marburg’s civic and religious leaders by asking them to write one of the final letters in the new Torah came naturally to the Jewish community.

“We have very good interfaith relations in our city. We have an interfaith roundtable and we sort things out with dialogue,” she explained.

“Of course, having non-Jews finish the Torah scroll is taking things one step further, but when our board discussed it, it really wasn’t a question,” she added.

Bunk reported that questions related to Jewish law were investigated, and that it was concluded that there was no impediment to having non-Jews participate in the finishing of the Torah scroll. With the letters supposedly being written by Belgian sofer Yosef Chranovsky and the non-Jews just putting their hand on his, it was really a symbolic act.

“We also consulted with a professor of Judaism about it, and he said it was fine, and that what was important was the higher purpose of what we were doing in terms of the unity of the Marburg community,” Bunk said.

El-Zayat, the Marburg Muslim leader, reportedly sought counsel from his imam about his helping to write a Torah scroll. Regardless, he apparently felt that responding positively to the Jewish community’s invitation was the right thing to do.

Following World War II, there was a small Jewish community in Marburg made up of displaced persons. After they left, decades passed before Jewish communal life was revived in 1989. The new synagogue building opened in 2005, and today there are approximately 350 Jewish community members, with some 50 of them using the synagogue regularly for traditional prayer services and other activities.

According to Bunk, the small Marburg Jewish community has been able to build its synagogue and have new Torah scrolls commissioned thanks to the support of a local foundation called Förderverein für Synagoge und Kulturzentrum der Jüdischen Gemeinde Marburg (Foundation for Synagogue and Cultural Center of the Jewish Community Marburg).

With tensions running high in Europe following the November 13 terror attacks on Paris and concerns that Islamic militants are infiltrating the continent amidst the recent massive influx of Middle Eastern and African refugees, the November 29 ceremony in Marburg did not go unnoticed.

“We did get some emails from other Jewish communities around Germany questioning what we were doing. And while some responses on social media to the video of the news report were supportive, others were less so. Some people said that Muslims just want to kill all the Jews,” Bunk said.

Regardless of what others think about a Muslim helping to complete the writing of a Torah scroll, the Marburg Jewish community believes it is doing the right thing in terms of maintaining warm, open relations with their neighbors of other religions.

“We pride ourselves on not closing doors,” said Bunk.