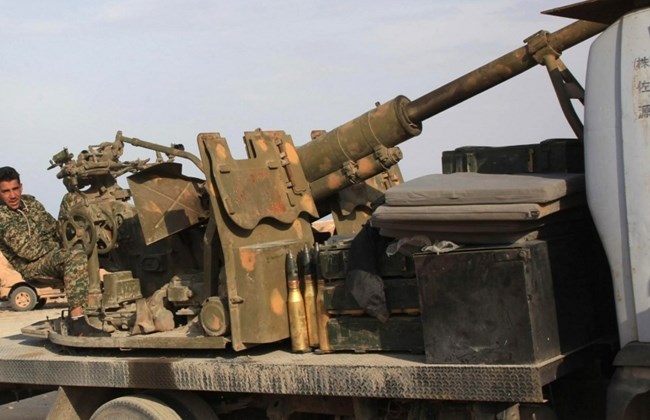 The Syrian government said Friday it has recaptured the long-contested city of Deir al-Zour from Islamic State militants, driving the group from one of its last remaining strongholds as its fighters mounted a final stand across the border in Iraq.

Gen. Ali Mayhboub, a military spokesman, described victory in the eastern city of Deir al-Zour as the “last phase” in the army’s campaign to defeat the Islamic State in Syria, three years after the group declared a “caliphate” stretching from the country’s northeast to territory deep inside Iraq.

Deir al-Zour had been divided into zones of Syrian government and Islamic State control for nearly three years. It is the largest city in eastern Syria and the largest to be recaptured by forces loyal to Syrian President Bashar al-Assad.

“With the loss of Deir al-Zour, Daesh loses its ability to lead terrorist operations by its militants who are now isolated and encircled” east of the city, said Mayhboub, using the Arabic name for the Islamic State.

Iraq’s military also said Friday that its forces have entered the center of the town of Qaim, the last remaining territory that the Islamic State nominally controls in the country. Qaim, a border town in western Anbar province, has been a strategic location for the Islamic State, providing a link to Bukamal – one of its few remaining strongholds in Syria.

In addition, the military said government forces have taken control of the border crossing between Syria and Iraq in Qaim. The capture deprives the militants of a critical juncture they had used to move fighters and equipment between their shrinking territory straddling both countries.

In a statement, Iraqi Prime Minister Haider al-Abadi congratulated the combined military, police and militia forces for securing the strategic border, which had been under Islamic State control since 2014. Earlier this week, he said Qaim would soon be liberated and that Iraq would be in position to claim total victory over the Islamic State in Iraq.

Though small, Qaim has been an important town for the Islamic State. U.S. and Iraqi intelligence officials have said the militants used Qaim as a safe destination for their top commanders and leaders as battles raged in larger cities such as Mosul earlier this year.