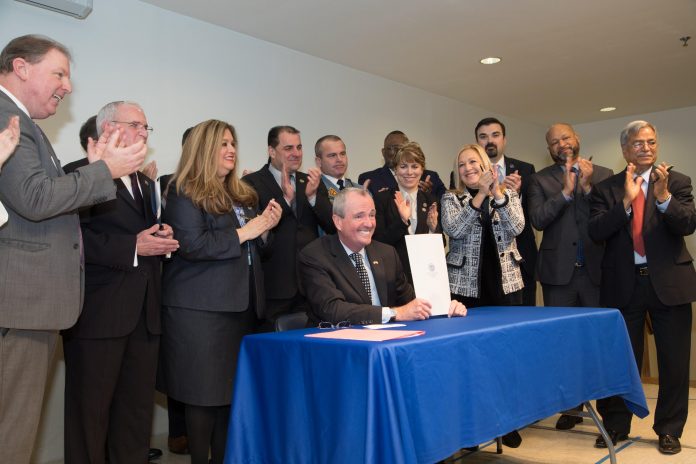 TEANECK, NJ – Teach NJ, the leading advocacy organization under the auspices of the Orthodox Union for New Jersey’s nonpublic school children, expresses its appreciation to Gov. Phil Murphy for signing into law today an historic bill that brings security funding for K-12 nonpublic schools to its highest level in the state’s history.

The governor’s adoption of A.4597, passed unanimously by the New Jersey Legislature in December, increases the security allocation for the state’s nonpublic schools to $22.6 million. That’s double the amount of the previous allocation, and six times the amount of the state’s allocation just three years ago. This historic $150 per-student funding will enable the schools to take a multitude of concrete steps, such as providing specialized security equipment and hiring more safety officers, in order to ensure students are protected from potential terror threats and attacks. The Governor signed the bill at YBH of Passaic in front of a group of nearly 300 of students, parents, educators, and communal activists.

“We are extremely grateful to Gov. Murphy for heeding the call of so many and making the well-being and security of all New Jersey’s children a priority,” said Teach NJ Chairman Sam Moed. “This is an enormous win for children and educators in New Jersey’s nonpublic schools and for everyone who cares about safeguarding our school environment.”

“We also extend our immense appreciation to the partnership and support of our interfaith partners including: the NJ Catholic Conference, the Council of Islamic Schools in North America, Agudath Israel of America, the Association of Christian Schools International, the NJ State Association of Jewish Federations, and the dozens of Jewish, Catholic, Christian, Islamic and other faith-based schools who joined our fight in Trenton to keep all children safe,” Mitzner added. “To all of these groups, schools and to their dedicated leaders – Thank you for your tireless and steadfast work to achieve our shared goal of keeping our children safe.”

Until Gov. Murphy signed the spending bill, security funding for New Jersey’s nonpublic school children amounted to 36-percent of that provided to their public school peers; the new allocation increases that to 73-percent. Teach NJ and its coalition partners will continue to advocate for equitable funding to protect all children.

Teach NJ, a division of the Teach Coalition, was founded in 2015 to advocate for equitable government funding for New Jersey nonpublic schools. It has secured an additional $100 million in funding for nonpublic schools, which is used to increase security, enhance education and defray higher tuition costs. Approximately 170 day-schools and yeshivas receive support through Teach NJ’s efforts. For more information, visit https://teachcoalition.org/nj/.