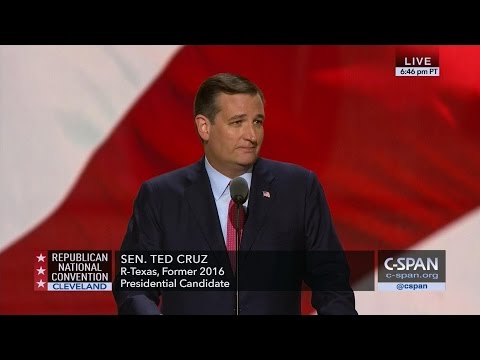 In case there was any doubt, Ted Cruz knew exactly what he was doing on Wednesday night when he snubbed Donald Trump and caused an uproar at the Republican National Convention. He just admitted it.

“I am not in the habit of supporting people who attack my wife and attack my father,” he said Thursday morning when asked if he planned to honor a pledge to support the GOP nominee, which will officially become Trump on Thursday night. “That pledge was not a blanket commitment that if you go and slander my wife that I am going to come like a servile puppy dog for maligning my wife and maligning my father.”

This is a man, mind you, who was given a speaking slot in prime time at a GOP convention devoted to promoting Trump. There was some confusion about just how much of a slight his non-endorsement of Trump was intended to be. Cruz did congratulate Trump and later told people to “vote your conscience” in 2016. But that latter statement caused pro-Trump delegates to quickly turn on him, boo, and loudly implore him to endorse Trump. It was a scene.

Shortly thereafter, Newt Gingrich took to the stage and tried to clean up the mess.

But that’s not what Cruz meant — at all.

Cruz is indeed a superb orator, and despite Gingrich’s attempt to smooth things over, it’s clear the controversy Cruz finds himself in is one he was angling for. As The Washington Post’s Chris Cillizza writes, “Cruz is also banking on the idea that Trump will lose in such a way that it will cause a post-election reckoning by the Republican party who supported him.”

Politicians will often kiss and make up after saying brutal things about one another, but the Trump-Cruz feud was always different. Trump didn’t just call him “Lyin’ Ted” or attack Cruz personally; he went after Cruz’s family — multiple members of it — with nasty attacks full of innuendo and lacking any real substance. Trump insulted the appearance of Cruz’s wife, Heidi. He threatened to “spill the beans” on her (whatever that meant). He played up a tabloid report that Cruz’s father, Rafael, kind-of, sort-of might have been wrapped up in that whole Kennedy assassination thing.

Cruz himself had called Trump a “sniveling coward” in response to the first attack. Cruz’s comment Thursday morning is basically “sniveling coward” 2.0. The “servile puppy dog” part is particularly brutal. He’s acknowledging that he hasn’t forgiven Trump for the sins of the primary. There is no pretense of graciousness or ‘let’s just defeat Hillary Clinton.’ Cruz basically just called Trump a bad person, and he’s letting people decide what to do with that.

The comments could be read as Cruz simply reacting to the backlash against his speech; maybe he didn’t really mean to stir the pot, but now he’s just got to respond in-kind to his critics and to Team Trump. Trump surrogate and New Jersey Gov. Chris Christie on Wednesday night called it “an awful, selfish speech,” after all. Trump himself tweeted that Cruz had been “booed off the stage.”

“Wow, Ted Cruz got booed off the stage, didn’t honor the pledge! I saw his speech two hours early but let him speak anyway. No big deal!”

But the aim of Cruz’s speech Wednesday was clear as day. He didn’t stray from his prepared remarks. Had he not uttered the “conscience” comment, things might have blown over, but he put that in there for a reason. He was telling people whom to vote for in November while conspicuously excluding even a brief allusion to voting for Trump or voting against Clinton. And in fact, Cruz’s comments Thursday strongly suggest he thinks voting “your conscience” means not backing someone who attacked his family repeatedly.

Some will read the backlash as the party turning on Cruz — something that might not help him politically going forward. But this was Cruz getting his long-delayed revenge. And at least he’s got that.