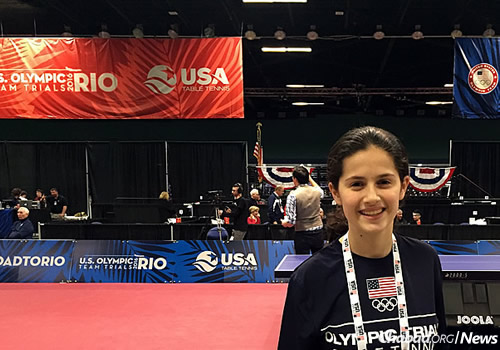 She’s only 14, but earlier this month, Estee Ackerman became a member of a very exclusive club when the Shabbos-observant teen participated in the U.S. Olympic Trials.

Her sport? Table tennis, in which she is ranked No. 14 in the country.

What is perhaps even more impressive is that the teenager, who lost her first two chances to make the team in competitions on Thursday, Feb. 4, and Friday, Feb. 5, forfeited a final chance the following day because it fell on Shabbos.

“I was disappointed; I love playing on such a big stage and the beautiful crowds that come to watch,” she said days later from her home in Long Island, N.Y. “But as much as I love table tennis … not playing on Shabbos is a greater reward.

“When I decided I wasn’t going to play on Saturday, I said I do have two tries. I feel I made the right decision,” affirmed Estee, a ninth-grader at Yeshiva University High School for Girls. “And it was a great feeling when I came back home to New York, and had my whole community supporting me and my decision.”

The U.S. Olympic Trials in Table Tennis were held in Greensboro, N.C., where Rabbi Yosef and Hindy Plotkin serve as co-directors of the Chabad-Lubavitch center there. The couple provided Estee and her father, Glenn Ackerman, with kosher food during their stay, in addition to home hospitality on Shabbos. Estee’s mother and older brother, Chanie Ackerman and Akiva Ackerman, did not accompany them on this trip.

The Plotkins were charmed by the high-schooler. “I thought she was incredible,” said Hindy Plotkin. “That she forfeited her third chance to try out for the Olympics, it’s pretty amazing.”

The Plotkins, who have four children between the ages of 1 and 7, even went to cheer Estee on during her competition. They also asked her to speak to students at the American Hebrew Academy, a Jewish boarding school in Greensboro, and to the local community while she was there.

“I was very honored,” said Estee. “I told people my story of why I was there and how I don’t compete on Shabbos. I hope they enjoyed it.”

She needn’t have worried; her message seemed to resonate soundly with those who heard it, including some who are not Shabbos-observant themselves. As Hindy Plotkin related, “a lot of people emailed me after Shabbos, telling me they were touched and impressed with her determination at a young age. That she’s 14 and has such strong values, for them, coming from a different place [religiously], that’s really quite amazing.”

Estee lost the first two matches on a Thursday and Friday, and decided not to compete in the third one on Shabbos. “I was disappointed,” she acknowledged. “But as much as I love table tennis, not playing on Shabbos is a greater reward.”

‘It’s Been a Journey’

This was the second time in her young career that Estee has forfeited her chance at improving her standing to observe Shabbos. The first time was in 2012, when she was participating in U.S. National Table Tennis Championships and one of her matches was scheduled on a Friday night.

While she will play leisurely with friends on a Shabbos afternoon, competing in a tournament with a uniform, scoring and all that goes with it just isn’t the same thing, she said: “What it came down to for me was that it wasn’t in the spirit of Shabbos.”

“We knew in advance that Estee would have only two chances to make the USA Olympic Team instead of three, as the third day of competition would be on Shabbos,” said her father, Glenn Ackerman. “I told Estee that I believed that she would make it on her first chance, and that she shouldn’t worry about anything else except the match she was playing. The reward one gets in heaven for proper Shabbos observance is infinitely greater than anything in this world. We love table tennis, but we love Orthodox Judaism more.”

As a Jewish day-school student, Estee juggles her table-tennis playing—she spends at least 12 hours a week training, not to mention traveling for competitions—with a dual curriculum of both Judaic and secular studies.

“It definitely has not been easy; it’s been a journey,” she said. “I’m blessed and thankful that my school loves what I do, and supports me in all my tournaments. When I go away and miss a week of school, the teachers help me make up the work. And having a school of 300 students behind me and cheering for me and happy for me is definitely a big motivation.”

For now, it’s back to the juggling as she continues to practice her sport and keep her studies a priority. And should she decide to go for it, the 2020 Olympic Games are only four more years away.