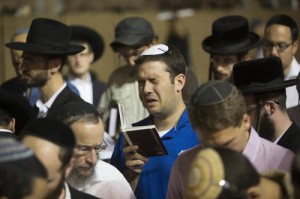 With their pictures posted on countless Facebook pagesand widely published in newspapers and on websites, the faces of the three missing Israeli teens have been etched deep into the global Jewish consciousness and individual Jewish hearts. But is there something quintessentially Jewish about the response to the crime of kidnapping?

Especially in Israel, where parents now watch their teens with equal parts gratitude and concern, the kidnapping is highly personal. Life-size pictures hang from storefronts, the boys’ features fly by on the sides of buses, and an increasing percentage of the passengers inside those buses have their Tehillims out. They are reading certain psalms such as No. 121, which centuries of Jews have turned to as an appeal for divine intervention in times of crisis. Indeed, it appears that the Israeli public’s focus on prayer might be at an all-time high.

In Jewish tradition, the crime of kidnapping is considered a violation of the eighth commandment, “Thou shalt not steal.” (Ex. 20:13) But when what has been stolen is one’s son, the threat is of course more personal than when one’s ox disappears. Untold thousands of Jews have been captured throughout Jewish history and often held for ransom, their captors well aware that Jewish communities will go to extraordinary lengths to redeem captives.

For most Israelis, personally redeeming the three boys is a distant dream. Instead, they support the boys and their families with an unofficial formula of prayer and unity.

When Jews need to engage in very serious prayer, the Kosel is often their destination. That is exactly where 17-year-old Hodaya Wienberg of Yerushalayim went on one recent evening. Her brother is a soldier stationed in the West Bank. “I’m here so he will come back fast and safely,” she says.

On June 26, some 200 men, women, and children gathered in the Jerusalem neighborhood of Baka to hear musicians including Yehuda Katz sing psalms designed to petition for the safe return of the boys. “I don’t know how powerful my prayer is alone,” Katz says as he tunes his guitar in preparation for going onstage. “But when we send up our prayers together, we are banging on the gates of Heaven and insisting that He open up and let our prayers in.”

“People are praying now who haven’t prayed in years,” says Rabbi Ronen Neuwirth of Ohel Ari Congregation in the Israeli city of Ra’anana. “And, as we plead for the boys’ safe return, others who already pray are finding their prayers are coming alive in new ways.”

“They say there are no atheists in foxholes,” says the author of “The Rosh Hashanah Yom Kippur Survival Kit,” Shimon Apisdorf. “Here in Israel everyday the boys are still missing we are looking at a very big foxhole.”

For Rachel Klein of Jerusalem, carrying a picture of the boys in her bag and keeping another on her refrigerator keep them at the front of her mind. “That way I can never forget that they need our prayers,” she says.

“When you are a Jew, prayer is an obligation to cry out to God in times of need,” says Sarah Yehudit Schneider, author of the 2009 book “You Are What You Hate.”

Prayer, explains Schneider,”fills in the hole which creates a conscious channel of partnership with Hashem, and this pulls down blessing from above.” Especially in times of crisis, people “are stretched and grow as a result of our prayer,” she adds.

“And when we begin to lapse into cynicism or despair, prayer can pull us right out of it. It stretches us so we can receive blessing. This is the purpose of every mitzvah, including the mitzvah of prayer,” says Schneider.

Prayer may be the most intimate of all the mitzvos-and that has “nothing to do with halacha,” according to Rabbi Binyomin Lau, head of the Israel Democracy Institute’s Human Rights and Judaism in Action Project and leader of the Ramban Shul in Yerushalayim.

“Especially in times of crisis, we are talking about the language of the soul, about using the words of the tefillah to express our deepest feelings, our truest selves,” says Lau.

Since news of the kidnapping emerged, countless congregations across Israel have added Tehillim to their daily and Shabbos services. “We go to the roots of ourselves, and we ask Him to intervene,” Lau says.

Katz, the musician, says he was visiting the family of abducted teen Naftali Frenkel when the topic of Jewish unity came up in conversation. “What [the Frenkels] wanted to talk about was their vision for bringing the Jewish people together,” says Katz. “And they told me that they feel every bit of our support.”

For Katz, music stands to serve as a conduit for both prayer and unity. “Our duty is to raise up cry after cry, plea after plea,” he says.”In this way we can learn once and for all that we are not primarily a religion but a nation and a family. All you have to do is look at their pictures to realize that these are our boys, too.”

“The main thing we can do now is overcome all the divisiveness,” says Rav Avrohom  Sutton, an Israeli author and teacher based in Kiryat Ye’arim, a town near Yerushalayim. “These boys are all of us. We are supposed to feel their pain. We are supposed to send them strength and encouragement. When we say them together, they bring us together and lift us up above the petty and the trivial.”

Rabbi Neuwirth says, “After the boys are back home we have to remember this lesson of a united Jewish people. Then we won’t need other painful lessons to remind us that we are one people and what unites us is so much bigger than what divides us.”

Rav Sutton, meanwhile, insists that prayer and unity must be supplemented “with our inner work, fueled by a true desire and yearning for redemption.” Neuwirth agrees.

“Prayer and solidarity? Yes, but they’re not enough. You have to become a better person than you ever were before. Otherwise God is not going to listen to our prayers or be impressed with our unity,” he says.

Rabbi Beals suggests that one way to accomplish this isby incorporating the boys into the happiest time of the Jewish week-when Shabbat enters our homes and our hearts.

“As we bless our own children at the Shabbos table on Friday night, Jews everywhere are also blessing those three boys,” Beals says. “They are a part of our family, as we are all part of the family of Israel.”