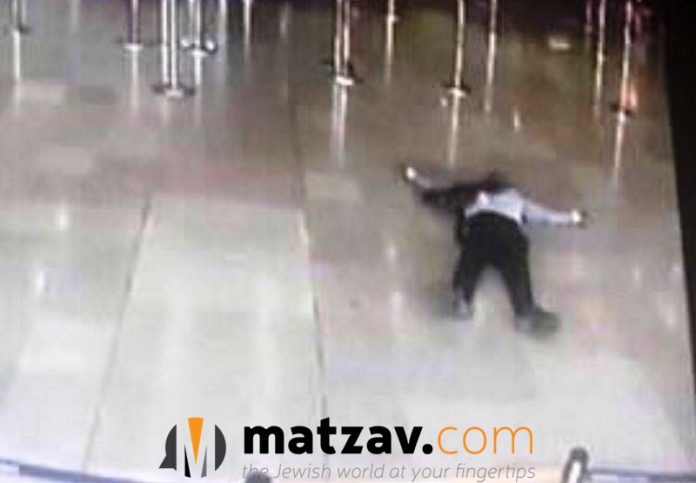 A man previously known to French anti-terror authorities was fatally shot early today at Orly Airport after struggling to steal a soldier’s gun and earlier assaulting a police officer at a traffic stop in a northeastern Paris suburb, the Paris prosecutor said.

The suspect, whom authorities identified as the French-born Ziyed Ben Belgacem, 39, told the officers he attacked in Orly Airport that he wanted to die “in the name of Allah” and that “whatever happens, there will be deaths,” according to François Molins, the prosecutor.

Just before 8:30 a.m. Saturday, Ben Belgacem approached three officers on patrol in Orly’s South Terminal and took one of them, a woman, hostage. He held a gun to her head and, contrary to earlier reports, managed to wrest her assault rifle away from her.

Molins said the assailant intended to open fire on the crowd of travelers.

Earlier Saturday morning, Ben Belgacem shot and lightly wounded a police officer at a traffic stop and then hijacked a woman’s car at gunpoint in another nearby suburb, the Paris prosecutor confirmed. He continued to Orly, southeast of Paris, where he grabbed the assault rifle from a security officer on duty. The stolen car was recovered at the airport, French authorities said.

French President François Hollande said authorities would investigate whether the attacker “had a terrorist plot behind him,” but the Paris prosecutors’ office had already announced that its anti-terrorism section had taken over the investigation.

Molins confirmed to reporters Saturday afternoon that Ben Belgacem, who was previously known to authorities in several drug and robbery cases, had been flagged on the government’s radar for “Islamist radicalism” in the past after an examination during a prison stint.

In November 2015, Molins said, following the deadly Islamic State-orchestrated attacks on Paris, Ben Belgacem’s name had been among those whose homes French authorities searched in connection with an investigation into radicalized networks.

The searches – authorized under France’s official “state of emergency,” passed after the Paris attacks – have been frequently criticized as violating the civil liberties of those searched and detained, and rights advocates have pushed the government to define “Islamist radicalism” more clearly.

The man’s father, brother and cousin had also been detained, Molins said.

The other two soldiers on duty at Orly fired a total of eight rounds at Ben Belgacem. No other injuries were reported.

Witnesses at the airport described rapid gunfire in a bustling terminal full of weekend travelers.

“We had queued up to check in for the Tel Aviv flight when we heard three or four shots nearby,” one traveler, Franck Lecam, told Agence France-Presse.

“The soldiers took aim at the man, who in turn pointed the gun he had seized at the two soldiers,” another witness, identified only as Dominique, said on France’s BFM television.

The officers who were attacked belonged to Operation Sentinel, Molins said, an elite squadron of French security forces established in 2015 to combat terrorism.

Operation Sentinel, created after the attack on the satirical Charlie Hebdo magazine in January 2015, includes nearly 10,000 soldiers, about half of whom patrol in the Paris region, mostly at tourist sites and commuter hubs.

About 3,000 passengers were evacuated from the South Terminal, and passengers in Orly’s West Terminal were confined there, Pierre-Henry Brandet, a spokesman for France’s Interior Ministry, said Saturday morning.

Shortly after noon, a police search of the airport ended and passengers from 13 flights stranded on the airfield were able to disembark, authorities said. Flights resumed.

The Saturday attack mirrored a shooting Feb. 3, when an Egyptian man attacked Operation Sentinel soldiers outside the Louvre museum and was then seriously wounded.

France has been under an official state of emergency since November 2015, when a cell of Islamic State militants carried out attacks on a concert hall, a stadium and a number of cafes across Paris. One hundred thirty people were killed.

Hollande’s Socialist government has struggled to stave off a steady stream of attacks that have continued despite heightened security precautions, including the launch of Operation Sentinel and home seizures that critics say are ineffective and have infringed on civil liberties in the process.

For instance, despite the imposition of the official state of emergency, in July, a lone driver, allegedly inspired by the Islamic State, plowed through crowds gathered to celebrate a national holiday in the seaside city of Nice, killing 86.

A number of smaller-scale attacks have taken place since, including the July slaying of an 85-year-old village priest, when two attackers backing the Islamic State – one of whom had been on a government watch list – slit the priest’s throat in the middle of a Mass.

The country is on edge heading into rounds of a presidential election in late April and early May, in which issues of national security and immigration have been central talking points for candidates across the political spectrum. Hollande, whose historic unpopularity prevented him from standing for reelection, has been constantly criticized for perceived incompetence on security issues.

Marine Le Pen, the anti-immigrant leader of France’s far-right National Front who is leading the polls in advance of the first round of the presidential vote, wasted no time in blaming Saturday’s incident on the incumbent administration.

“France [is] overwhelmed by violence, the consequence of the laxity of successive governments,” she said on Twitter. “But there is the courage of our soldiers!”

By contrast, Le Pen’s leading opponent for the presidency, Emmanuel Macron, a popular centrist candidate, gave a speech Saturday in Paris on the issue of defense, praising in his remarks the “calm, control and professionalism” of the officers at Orly.

Hollande, in a statement, reiterated France’s commitment “to act without respite to fight terrorism, defend our compatriots’ security and ensure the protection of the territory.”