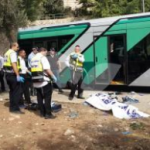 In the wake of Tuesday’s multiple attacks in Yerushalayim and Ra’anana, in which three Israelis were killed and dozens wounded, the Israeli defense establishment assessed that they were not perpetrated by “lone wolves,” Israeli website NRG reported later the same day.

That the attacks all occurred within about an hour and a half of one another at different pre-selected locations aroused the suspicion that this round of Palestinian and Israeli-Arab terrorism was not random and individual, as previous shootings, stabbings, rock-throwing and car-rammings seemed to be, but rather backed and organized.

According to nrg, Israeli officials who spoke to the Associated Press on condition of anonymity said that the coordinated nature of Tuesday’s attacks suggested the presence of a “guiding hand.” They added that Israel was expecting the current wave of terrorism, which surged on Rosh Hashanah last month, to continue for another few weeks.