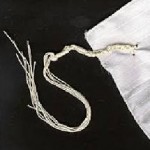 Yair Ben Ezra, who was critically injured in last month’s terror attack in Ra’anana, has revealed his miraculous story about how his new tzitzis – which he was pondering whether to wear that very morning – had saved his life.

On October 13th, while waiting at a bus station, Yair was stabbed five times in multiple parts of his body by a terrorist from East Jerusalem.

On the morning of the attack, which occurred a day before his sister’s wedding, Yair was pondering whether to wear the new tzitzis he had purchased for the chasunah.

“On the morning of the terrorist attack,” said Yair, “all of my tzitzit were hanging to dry on the laundry line. I had only one new pair of tzitzit folded in the closet. Then the yeitzer hara came and told me, ‘Nothing will happen (…) save them for the wedding tomorrow.’ In the midst of this dilemma,” recalled Ben Ezra, “I said to myself, ‘No!  This is my custom (…) this is my personal protection!'”

Eventually, “While I was stabbed and waiting for the medics,” Yair related, “the tzitzit I was wearing was used as a tourniquet for my stab wounds by the emergency rescue staff.”

Although critically wounded in the attack, Ezra fought his attacker, preventing him from attacking further civilians.