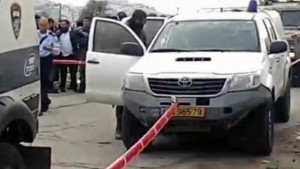 A Palestinian teenage girl was shot Sunday as she tried to stab an Israeli in the settlement of Kiryat Arba, next to Chevron, security forces said.

IDF soldiers at the scene fired on the suspected assailant, wounding her moderately to seriously. No Israelis were reported injured in the incident.

“A stabbing attempt was thwarted,” the IDF said in a statement.

The attacker was taken by paramedics to Hadassah Hospital in Jerusalem’s Ein Kerem neighborhood for treatment. She was named by Palestinian sources as 16-year-old Lama al-Bakhri, from Chevron.

Video footage from the scene showed IDF soldiers placing her on a gurney and wheeling her to an ambulance. Read more at Times of Israel.