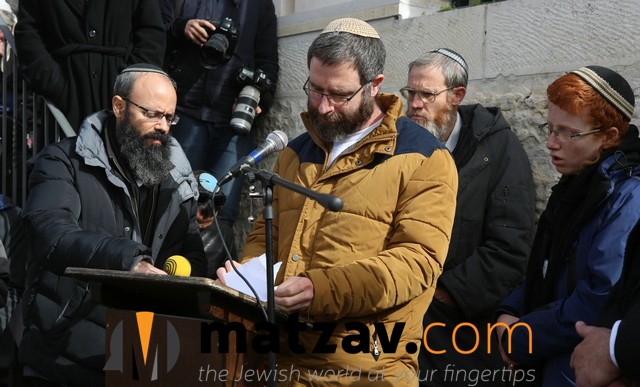 Natan Meir, widower of terror victim Dafna Meir who was killed in January by a terrorist inside her home, accused the UN of ignoring his plight and that of his children in a letter written to UN Secretary General Ban Ki Moon. Meir reflected in the letter, upon his visit to the UN headquarters in New York over two weeks ago under the auspices of Israeli Ambassador to the UN Danny Danon and the One Family non-profit organization.

“Not a single ambassador of the nations of the world bothered to come and comfort my 17-year-old daughter,” wrote Meir. “Not one came up to shake our hands. No one called or met with us before or after. No one wrote a letter.”

Apparently, the UN Secretary General did not approach Meir or his daughter, either.

“Even you, Mr. Secretary General, while sitting at the head of that meeting, did not reach out to us and or take notice of our anguished faces,” continued Meir.

Referring to himself as a “citizen of the world,” Meir also addressed the controversy involving his place of residence in the town of Otniel, located in southern Judea. Israeli construction in the Judean and Samarian regions, which were captured by Israel in the Six Day War of 1967, is viewed by many in the international community as illegal.

“Indeed, I know my place of residence is not acceptable to you, and so I ask you not to consent, but to understand,” Meir said. “You should know that many of my neighbors who are considered Palestinian Arabs have sent condolences, looked me in the eye, and come to my house.”

“They know and I know that true peace will be achieved by us, the common people,” Meir contended.

Meir also took the opportunity to object to current efforts within UN circles to impose a two-state solution between Israel and the Palestinian Authority. He described such a plan, which would almost certainly result in the evacuation of thousands of Israelis living in Judea and Samaria, as racist and a violation of democratic principles and norms.

“The United Nations demands that Israel implement the vision of political separation by fences and borders,” noted Meir. “In this solution, there are no human rights and no democracy. It is based on a shocking element of racism.”

Meir suggested to the UN secretary general that efforts should instead be concentrated on mutual peace building initiatives between Israelis and Palestinians on the ground.

“Peace is the result of building a life together, recognition and appreciation of shared beliefs, mutual acquaintance, endless patience, and endless love,” wrote Meir. “All these things require time, dozens, or even hundreds of years.”

“Patience of generations enables mutual forgiveness and building a life together despite the pain,” asserted Meir. “This is the way real equality comes from shared inner desire.”

In that vein, Meir called for the secretary general to adopt such an outlook and to participate in the implementation of such a plan.

“Make it possible for us to patiently advance our shared lives for posterity,” requested Meir. “Please help us to build bridges and connections between people, rather than borders and fences.”