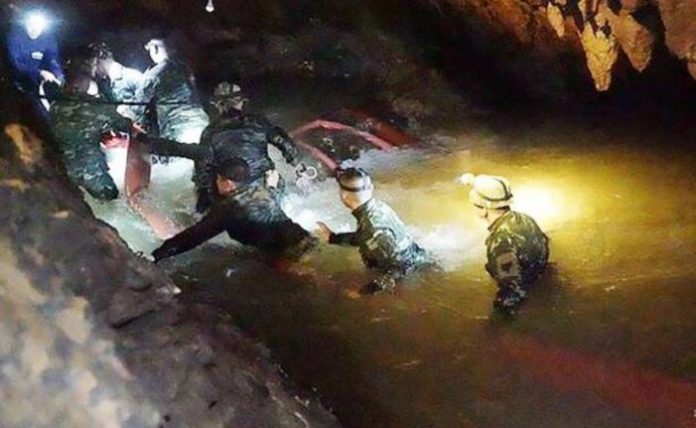 A grim realization has settled in among officials and rescue workers racing against the clock to extract 12 young soccer players and their coach from a flooded cave: that not all members of the group may make it out unharmed, or even alive, as the risks of every possible method come into sharp focus.

Late Friday, Thai officials were still trying to come up with a workable extraction plan for the group trapped for nearly two weeks deep inside the cavern, stoking fears that all available options remain too risky.

Officials said they were rethinking potential strategies after a diver died Friday while placing compressed-air tanks along a route through the vast complex.

“We are trying to set a plan,” said Narongsak Osottanakorn, the governor of Chiang Rai province. “If the risk is minimum to get them out, then, maybe, we will try.”

Saturday will mark two weeks since the dozen young teammates and their coach became stranded more than two miles inside the cave when flash floods from heavy rains blocked their exit and now pose huge challenges for a growing team of rescuers from around the world.

In a possible new bid for a solution, engineers working for the entrepreneur Elon Musk will be sent to Thailand. In a string of tweets, Musk said his tunneling firm, Boring Co., and others will look for new ways to reach the underground chamber in the country’s north.

Drilling into the cave and extracting the boys from above has been suggested, but Narongsak, speaking at a news conference, said only 18 of 100 holes that have been located are potentially viable.

He pointed out that any drilling process could take months, likening the situation to the 2010 mine rescue in Chile that took 69 days to get the stranded miners to the surface.

“We are trying to rule out the impossible,” he said.

The boys, he added, “cannot dive at this time” and are not ready to make the almost six-hour journey out of the cave. Two of them and their coach are in poor health. Officials also remain desperately concerned about the weather, with heavy rains forecast within days that could flood the cave again and render futile any efforts to pump water out.

“We would like to take the minimum risk possible,” he said. “But we can’t wait for the rain.”

The governor’s midnight news conference, held just as a drizzle started to fall over the muddy, chaotic rescue site, underscored the lack of a good option to free the boys and their coach after they were found alive Monday night.

Getting the boys to dive their way out of the cave has been raised as the most likely possibility, but a retired Thai navy SEAL preparing for that option by placing air tanks along an exit route ran out of oxygen himself early Friday and died.

Speaking at a news conference, a commander of the Thai navy SEAL group said the diver was found unconscious about 1 a.m. Friday. Efforts to revive him were unsuccessful, and he was later transferred to a hospital where he was pronounced dead on arrival.

“It is sad news,” Pasakorn Boonyalak, deputy governor of Chiang Rai province, said at the news conference. “His job was to deliver oxygen, but he did not have enough on his way back.”

The fatality, the first of the rescue mission, has raised fears that a rescue mission could be fraught and even deadly for the boys.

The diver was identified as Saman Kunam, a 38-year-old retired navy officer. His body was taken to a naval base in central Thailand, and then on to his family in the northeastern part of the country.

Although he had left the navy, Saman, a triathlete, felt a calling to join the rescue effort. A video surfaced Friday of him waiting to board a plane from Bangkok to Chiang Rai, announcing proudly that he was going to “bring the kids home.”

“This mission is really scary and dangerous,” Pasakorn said. But, he added, “we will have to continue our mission as planned.”

The diver was found about half a mile from where the 12 young soccer players and their coach have been trapped since June 23.

Thai navy officials say they are undeterred by the death of the rescue diver and will continue the mission as planned. Speaking to The Washington Post, Thai SEAL commander Apakorn Yookongkaew said that divers would take extra precautions with the boys to prevent injuries or fatalities.

Officials also said Friday that water levels continue to fall in the cave and that they have succeeded in getting an oxygen pipeline to the section of the cave where the boys are stranded and where the supply was running dangerously low.

But light rains Friday morning broke a relatively dry spell around the rescue site, and more rain is forecast in coming days.

Four navy SEALs are stationed with the boys to monitor their health, provide them with food and check on oxygen levels. The boys are being given high-protein ready-to-eat meals, similar to army rations. Authorities are also continuing to look for other ways out for the boys – including drilling through the cave so they can be extracted without making the perilous five-hour dive all the way to the cave’s entrance through narrow, pitch-dark passageways filled with muddy water.

The SEAL commander raised the possibility that the boys’ location on a muddy patch above the water may not stay dry for long, as heavy monsoon rains could flood the cave again.

“The situation is changing all the time,” Apakorn said. “We still have to wait and see what happens next, and whether the water level will rise again.”