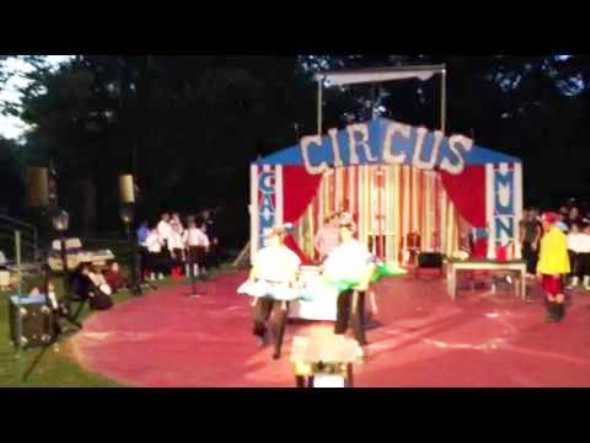 In recent years it has become increasingly harder to find places to bring children for good, clean and wholesome entertainment.

Summer vacation adds an additional challenge, with kids off from school and often finishing day camp and looking for something to do. Camp administrators have also been faced with the challenge of finding appropriate trip locations that are befitting frum Jewish children.

For close to 60 years, one solution to this issue, and the best bet for a kosher night out, has been the Camp Munk Circus.

59 year ago, in a small camp in Ferndale NY, a night activity was created that replicated a typical circus. Very quickly parents began to come to camp to watch their children perform in this very cute camp event. After seeing the popularity which this camp function was receiving, the legendary R. Josh Silbermintz ztz’l had a visionary idea. R. Josh, as he was affectionately called, recognized the benefits of having a framework for boys to realize and utilize their various talents. He envisioned a show that would be open to the public, with all the proceeds going to very worthy tzedakos. Shortly thereafter, the now extremely popular Camp Munk Circus was born. To date, hundreds of thousands of dollars have been raised for tzedakah through the Camp Munk Circus. For many years R. Josh Silbermintz ran the circus meticulously, adding new acts every year. Campers and staff of all ages began to learn how to act, sing and do acrobats (or Munkrobats, as they’re called in Camp Munk). Finding staff members to cut wood for props, paint backdrops, and man the sound and lighting equipment became a major feat in and of itself.

In the Year 1990 the renowned R’ Dave Silverman took over the reins as the ring leader of the circus and continued the tradition for the next 23 yeas, adding his own talents and one-of-kind personality to the show. Now, almost six decades later, under the leadership of R’ Yosef Wartelsky, or Reb Joe as he’s called, the cute, mock circus that started as a little night activity, has evolved into the unparalleled Camp Munk Circus.

One can frequently overhear men and women reminiscing about their earliest summer memories at the Camp Munk Circus. What is undoubtedly more significant, is speaking to the boy who started his summer a bit unhappy because he wasn’t thriving scholastically during the school year and wasn’t really bringing much to the table on the ball field in camp either, but has now found his healthy outlet singing in the circus choir or acting in the highly popular lip-synched tape. In addition to the entertainment it provides, the Camp Munk Circus has instilled confidence in to generations of campers. “There is a tremendous feeling of fulfillment knowing that a camper has developed a talent he never knew he had” comments R’ Joe, “and the effect the experience has on campers lasts a lifetime”.

At 8:15 on Wednesday night August 17th, you can come see this incredible show.
So, if you hear your kids whining the infamous “we’re bored!” they won’t be bored for long! Come join the exhilaration felt by thousands of men, women and children at the best ever Camp Munk Circus 2016.