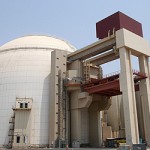 A month from today or a year from today, an Iranian scientist or general might defect to the West – and present hard proof that Iran has broken the rules of its nuclear agreement, and is building nuclear bombs.

That’s how the West learned about some of Saddam Hussein’s weapons programs – after his two son-in-laws defected – but such an occurrence will have no effect on Iran.

There will be no military action and no sanctions against Iran, because of three Communist figures that support Islamic extremists:

Even if Barack Obama, John Kerry, or Hillary Clinton had an amazing change of heart after seeing new evidence of Iranian bomb-making, they could not overturn the “P5+1” accord, because three of the five – Russia, China, and the EU – are in Iran’s pocket and bound to block action.

The neo-communist Putin and the Communist Party of China are no surprise, but few Western analysts or journalists – let alone Obama Administration officials – have spoken of the strong built-in Communist and pro-Islamist tendencies of EU Minister Mogherini, who was a member of the Italian Communist Youth Federation from 1988 to 1996.

The Italian Communist Party changed its name to the Social Democratic Party, but Mogherini has never disavowed her Communist roots or her sympathies for Islamism.

On the contrary, she has re-asserted them.

“Islam belongs in Europe,” declared Mogherini,  the 43-year-old EU foreign minister, in a conference in Brussels on June 24, 2015.

“The idea of a clash between Islam and ‘the West’,” she said, “has misled our policies and our narratives,” repudiating the ideas of political scientist Samuel Huntington and Islamic scholar Bernard Lewis.

Mogherini, who holds a bachelor’s degree in political science, wrote her senior thesis on Islam, though she apparently does not read or speak any Middle Eastern languages.

“Islam holds a place in our Western societies. Islam belongs in Europe,” declared Mogherini, who served as the EU’s top negotiator with the Islamist regime in Iran.

“It (Islam) holds a place in Europe’s history, in our culture, in our food and – what matters most – in Europe’s present and future. Like it or not, this is the reality,” asserted Mogherini, who has also been criticized inside Europe for her lack of experience and for sympathizing with the actions of Vladimir Putin.

“We need to show some humble respect for diversity. Diversity is the core feature of our European history, and it is our strength. … We need to understand diversity, understand complexity. … For this reason I am not afraid to say that political Islam should be part of the picture.”

When President Obama and Secretary Kerry say “Europe” backs the Iran accord, remember that it is a very small, specially selected, and very left-wing part of Europe.

When President Obama and Secretary Kerry say the United States will be able to “snap back” sanctions against Iran, there is good reason not to believe them.

Dr. Michael Widlanski is the author of Battle for Our Minds: Western Elites and the Terror Threat, published by Threshold/ Simon and Schuster.  He teaches at Bar-Ilan University, was strategic affairs advisor in Israel ’s Ministry of Public Security, and was the Schusterman visiting professor at University of California, Irvine for 2013-14.