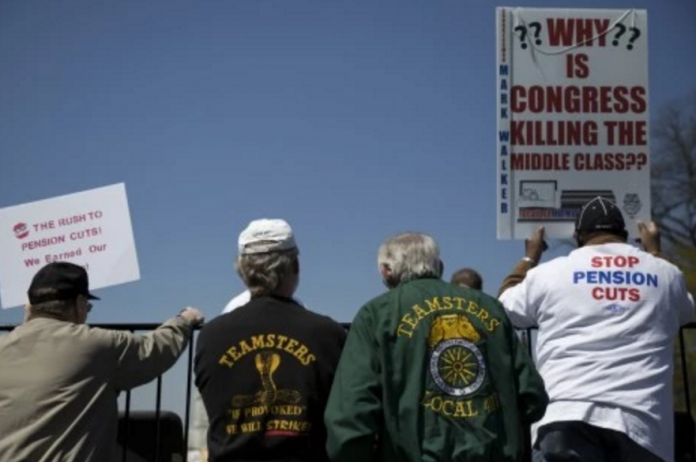 One of the nation’s largest multi-employer pension funds said that it is out of ideas for ways to save itself from an impending failure.

After the Treasury Department rejected its Hail Mary proposal, which would have substantially cut benefits for some retirees, the Central States Pension Fund has little choice but to turn to a federal insurance program that is supposed to offer a lifeline to troubled pension funds.

But there’s one major problem – that program is expected to run out of money, too.

The Pension Benefit Guaranty Corp., which insures private pensions, is dealing with long-standing financial woes with the fund that protects multi-employer pension plans. The program, which some experts say wasn’t really intended to be used, was set up more than four decades ago to serve as a backstop for private-sector pension plans. But it has been relied on more than expected by large plans on unsteady financial footing.

The fund’s deterioration could pose a threat to the 10 million people in multi-employer plans who could soon be left without a safety net for their pensions. Although most of those workers and retirees are in plans that are financially healthy, about 1.5 million people – including the Central States members – are in plans that are projected to run out of cash over the next 20 years.

In the past few weeks, lawmakers, Central States officials and consumer advocates have called for a legislative solution that would shore up fragile pensions and the struggling insurance fund.

“We need a more comprehensive solution,” said Rep. Marcy Kaptur, D-Ohio, who introduced a bill last year that would provide the insurance program with government assistance. “Millions and millions of Americans are affected by this.”

Previous efforts to bolster the insurance program have failed, or so far fallen short. For instance, a 2014 law that made it possible for multi-employer pension plans to cut benefits for retirees was meant to alleviate the burden on the PBGC. But now that the Treasury Department has rejected the Central States proposal, which was the first test under the law, the insurance agency is back where it started.

With roughly $2 billion in assets, the fund for multi-employer plans does not have enough money to pay benefits for the plans that are expected to become insolvent over the next decade.

The Central States fund alone, which pays about $2.8 billion in benefits each year and is the largest multi-employer plan in financial trouble, would overwhelm the multi-employer insurance program if it went under.

“At this time, only government funding, either directly to our Pension Fund or through the PBGC, will prevent Central States participants from losing their benefits entirely,” wrote Thomas Nyhan, the executive director of the fund, in a letter on why he thinks the fund cannot come up with another rescue plan.

The Pension Benefit Guaranty Corp., which insures private pensions, was created as part of the 1974 Employee Retirement Income Security Act (ERISA) to provide another level of security for the millions of Americans counting on pensions in retirement. The agency has separate programs for single-employer plans, through which one company is paying completely for the costs of financing a pension, and multi-employer plans, which allow businesses to share the costs of providing pension benefits to their workers. The insurance fund for single-employer plans is financially stable, but the fund for multi-employer plans is woefully underfunded.

That’s because when the multi-employer plan insurance fund was created, it was expected that the fund would not be needed much, said Josh Gotbaum, former director of the Pension Benefit Guaranty Corp. and a guest scholar at the Brookings Institution.

But over the past several years, multi-employer plans have faced financial challenges similar to those of the Central States fund, he said. Two severe market downturns over roughly 10 years left the plan without enough money to pay expected benefits. At the same time, many companies went out of business, leaving the plan with a smaller number of employers available to pitch in and cover that shortfall.

“What they didn’t think of was, suppose if most of the companies go away and only a few employers are left holding the bag?” Gotbaum said.

With that shortfall in mind, many of the workers and retirees covered by the Central States plan are rallying behind a bill introduced by Democratic presidential candidate Bernie Sanders and Kaptur that would repeal the 2014 law that made it legal to cut pension benefits and instead lead to government assistance for the PBGC. Over the past two weeks, senators including Sherrod Brown, D-Ohio, Claire McCaskill, D-Mo., and Ron Wyden, D-Ore., wrote to Senate Majority Leader Mitch McConnell, R-Ky., asking him to address the pension crisis before the Senate breaks for the summer.

But because previous efforts to boost pension funds with taxpayer dollars have failed, fund executives and other pension experts are skeptical that any legislation calling for government help will gain traction. A 2010 bill that would have provided taxpayer assistance to pension funds died in committee. Gotbaum said that if such an effort didn’t survive when Democrats had a majority hold in Congress, he doubts a similar program will advance much in a Republican-controlled legislature.

In the meantime, lawmakers could provide more funding for the PBGC in a way that doesn’t rely on taxpayer support – increasing the annual premiums that multi-employer plans pay to the PBGC, which are still set by Congress.

Those premiums, which are essentially paid by the companies in the plan, were more than doubled to $27 per participant in 2014, but a bigger increase is needed for the fund to be able to support all of the plans expected to run out of cash, Gotbaum says.

The PBGC is scheduled to issue reports in early June that offer more insight on the financial health of the fund and explain how large premiums need to be to keep the fund solvent. The agency declined to comment ahead of the reports.

In a report released in March, the agency said annual premiums paid by multi-employer plans would need to be increased to $156 per person, or about six times the current amount, to give the fund about a 90 percent chance of staying solvent over the next 20 years. While that is substantially higher than what multi-employer plans are paying now, it would put them on par with the average premium paid by single-employer pension plans, making it more feasible, Gotbaum said.

Whatever the fix, retirees and consumer advocates are urging Congress, pension plans and the insurance agency to make changes before it’s too late.

Dale Dobbs, a retired driver near Richland Center, Wis., would have seen his pension cut by 50 percent if the Central States proposal had been approved, he said. Treasury’s rejection of the plan bought the retirees more time to find an alternative solution, but their “work is not done,” said Dobbs, 73.

“The only real option is for Congress to step forward,” he said, adding that he is encouraging his fellow retirees to contact their local representatives.