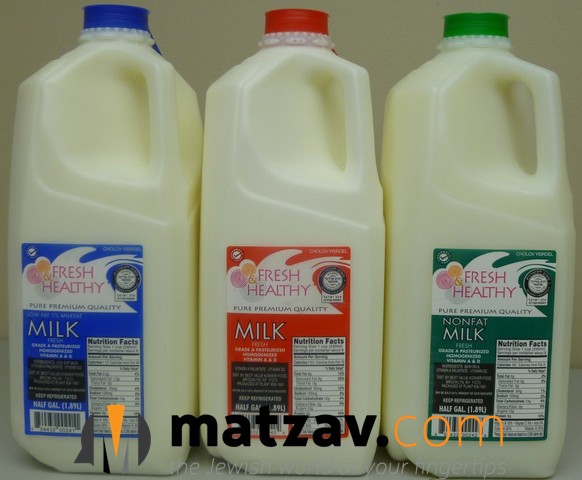 The controversy has been raging on for close to two decades now.

And it has appeared at various venues. There is an Exxon Station on Route 9 in Lakewood, New Jersey, at the corner of Route 9 and County Line Road.

There is a Sunoco station right past exit 5 on the Palisades Parkway in New Jersey, as one heads toward the George Washington Bridge.

And now, there are ten Starbucks in which the controversy has hit. [For those that feel the list is not exhaustive, there is also a 7-11 on Route 9 in Lakewood, New Jersey too, and a Coffee Bean in Los Angeles, California on the corner of Beverly and Alta Vista. ]

These gas stations and coffee shops are often visited by coffee lovers across the Charedi spectrum, and the non-Jewish owners are catering to them by making Cholov Yisroel available to add to their coffee. Generally speaking, these gentile establishments are providing their Cholov Yisroel consumers with both the lowfat milk variety (usually with a blue cap and blue label on a half-gallon plastic container) as well as the regular variety (usually with a red cap and red label).

Last year, a number of Chassidishe Poskim published a warning that an open bottle of Cholov Yisroel in a non-Jewish establishment renders the bottle no longer Cholov Yisroel and thus forbidden according to halacha. Yet numerous Cholov-Yisroel-only Jews continue to consume the milk, assuming that it is quite remote that any gentile worker or owner might switch out the Cholov Yisroel milk with regular milk just to provide religious Jewish customers with “kosher” milk for their coffee. And now, with the announcement that ten Starbucks are now exclusively stocking “Pride of the Farm” brand Cholov Yisroel milk – the controversy is once again raging. This is not to say, by the way that Starbucks are certified kosher – they are not. It is just that if someone wants to drink their brewed coffee – Cholov Yisroel is now available.

This author posed the question to a number of well-respected Chassidishe Poskim who stated unequivocally that the milk is not kosher. These Poskim included Dayan Hershel Ausch, the Av Bais Din of Karlsburg [headed by Dayan Yechezkel Roth shlita, the Posaik of the Satmar Rebbe Rav Yoel Teitelbaum zt”l], Rav Yisroel Dovid Harpenes, a noted Posek in Williamsburg, and Poskim from Skver. Their rationale was that Cholov Yisroel requires a chosem – a seal, and that a] an umdanah (roughly translated as a compelling halachic assumption which can be used to form legal rulings) is not effective when a chosem is required and b] there is, in fact, no umdanah here because the gentile will always want to provide milk for his customers and will thus pour regular milk into these containers behind closed doors.

However, Rav Yisroel Belsky zt”l, when asked about the Route 9 Exxon gas station in Lakewood, ruled that it was unquestionably permitted. He explained that everyone knows that when one bottle of milk is poured into another bottle of milk that is outside it causes spoilage and no one would do that. Some, however, questioned whether or not workers at a gas station would be aware of this point.

This author spoke to another highly regarded litvishe posek who expressed his opinion that the milk would still be considered Cholov Yisroel whenever there is no “chashash chiluf – a concern of switching.” He disagreed with the idea that an umdanah is ineffective when a seal is required.

The operative chapter behind this raging controversy is found in the 108th chapter of the Yore Deah section of Shulchan Aruch which contains thirteen s’ifin or sub-paragraphs.

NEED FOR A SEAL

The first s’if (sub-paragraph) explains that meat or a piece of fish where the fins and scales were removed require two seals (chosmos) when sent through a non-Jewish intermediary or messenger. However, milk or cheese or other things that are only forbidden by Rabbinic law, require only one seal. This is the source in Shulchan Aruch that one seal is required to ensure that Cholov Yisroel is not replaced with regular store bought milk.

WHEN THE SEAL IS NO LONGER EXTANT

In s’if three, it is explained that the formation of two Hebrew letters is considered like two seals rather than one seal. In other words, we see that the idea of a seal is not a foolproof tamper-proof system of protection. A gentile who tries hard enough could feasibly forge two Hebrew letters. Yet the assumption is that he will not go through such extensive effort.

In s’if four we learn that, according to the Ramah, if the item was sent in a bag and the bag had a seal – it is not considered a valid seal. The seal apparently must be on the item on not on the outer sack.

WHEN THE BETTER ONES HAVE A SEAL

In s’if five we learn, in regard to a Rabbinically prohibited item, that if he recognizes that some of the products still retain their seal, and they are the higher quality ones – then the other ones are still considered kosher – since the gentile would have switched out the higher quality ones. We see from here strong evidence that an umdanah is, in fact, utilized even when there is a requirement for a seal.
S’if six tells us that the physical signs that an animal was slaughtered is not sufficient to be treated as a Chosem.

S’if seven tells us that if the place in which the gentile was sent with the item is considered a place where the public passes – it is permitted. The reason is that the gentile will be concerned that he will be seen and he will be viewed as a thief. However, notes the Shulchan Aruch: Ideally, a person should not send food with a gentile without a seal.

This sub-paragraph is fascinating and is in all probability the most germane to the raging controversy under discussion. Some wish to permit the milk based upon the fact that if the owner or an employee switches out the Cholov Yisroel milk with other milk, it will be readily seen by passersby. Indeed the Taz and the Pri Chadash both write that even if the passersby are only gentiles – that gentile would be concerned that they would tell on him.

ARE THESE PLACES PUBLIC PLACES?

They also point out that, generally speaking, you can always look into these Starbucks because their construction is made of glass. The Palisades Sunoco Station is also open 24-7 as well as the Exxon Station on Route 9 in Lakewood.

NOT VIEWED AS A THIEF – BUT CAUGHT AS ONE

Those that forbid the milk could argue that there is a huge distinction between our case and that of the Shulchan Aruch. The Shulchan Aruch’s wording is that the gentile would be afraid that he would be “caught red-handed” and called a thief and hence – pounced upon and or jailed as a thief. This is a far cry from switching milk containers which would carry very little repercussions.

LAWSUITS ARE JUST LIKE BEING POUNCED UPON AS A THIEF

Some rabbonim have pointed out that the fear of being “caught red-handed” is a real one – particularly after the famous 2001 McDonald’s Corporation French Fry case – where McDonalds agreed to pay ten million dollars for misleading consumers about their French Fries for ten years. In 1990, after being pressured by the vegans, McDonald’s announced that its restaurants would no longer use beef fat in cooking French Fries and that only pure vegetable oil would be used.

But on May 1, 2001, a lawsuit was filed in Seattle on behalf of two Hindus who didn’t eat meat and one non-Hindu vegetarian. The french-fry category of the official McDonald’s ingredient list made no mention of beef tallow or beef extract. They only listed potatoes, partially hydrogenated soybean oil, and natural flavor.

McDonald’s tried doing damage control by issuing a statement at the time of the lawsuit that said: “The natural flavoring consists of a minuscule amount of beef extract,” – but it was too late. They paid out ten million dollars.

Some rabbonim claimed that Starbucks Corporation and perhaps the owners of the Route Nine Exxon and the Exit Four Sunoco are aware of the lawsuit against McDonald’s and would thus be very careful.

Others claim that they can still switch out the milk behind closed doors or behind the counter, and that most of the workers and managers are completely unaware of the lawsuit against McDonald’s – and thus the distinction between contemporary times and the times of the Shulchan Aruch is still very valid.

There is also the opinion of the Isser v’Heter (22:7-8) that we are only discussing a servant or employee of the Jewish owner and not just any gentile – where it would clearly be forbidden. Although the Shach and the Toras Chatas disagree with the Isser v’Heter, it could be that they would agree with him in regard to this case where there is no Jewish neighborhood per se (Indeed, the Toras Chatas specifically limits the leniency to a Jewish neighborhood).

Inquiries at a Starbucks reveals some interesting facts. The Starbucks are corporate owned; they are not franchises. The Starbucks that have Pride of the Farm Cholov Yisorel carry no other milk. If a Starbucks runs out of any product they are instructed to go to another Starbucks to get that product. They would not get that product from another locale, and there is no incentive for them to do so whatsoever. It would seem, however, that they may go the closest Starbucks in such an event and if that other Starbucks is not Cholov Yisroel – there may perhaps be a concern. However, rarely if ever would a Starbucks actually run out of milk.

It seems to this author that an Umdana certainly would work to permit the milk even if there was no chosem, seal.

Let us also go back to Rabbi Belsky’s point – that people do not pour milk from one container to another. It seems that this information is actually taught in state-mandated health courses in which one employee and or owner of any establishment that deals with food and refrigeration must attend.

It would seem also that if there is ample Cholov Yisroel in the refrigerator there would be an umdana that the milk was not, in fact, switched. The fact that the Ramah says in S’if 2 that it is only forbidden if there is a financial benefit and an incentive would make it hard to imagine that a gentile employee would care enough to risk spilling and spoilage and the extra effort for a mere sale of a few cups of coffee.

True, S’if zayin states that ideally one should not send milk without a Chosem, but it is this author’s conclusion that the milk of exit 4 and of Exxon Route Nine still remains Cholov Yisroel – it is just not l’chatchilah.

It also seems to this author that the Pride of the Farm Cholov Yisroel milk in the ten Starbucks would not be a lack of a lechatchila either. There are so many other umdanahs associated with the Starbucks operation that an open Cholov Yisroel container in one of these ten stores would be considered full Cholov Yisroel.

Of course each person should consult his or her own rov, posek or dayan and not rely on the conclusions found here.

One should also note that some of the Starbucks actually wash some of the pots with non-kosher. This is also not ideal and often forbidden. The brew baskets of the plain coffees are generally not washed in this manner, however and even if they are – it does not present a problem (see an extremely learned CRC document on Starbucks written in 2011 by Rabbi Sholem Fishbane and Rabbi Dovid Cohen).

The author can be reached at [email protected]