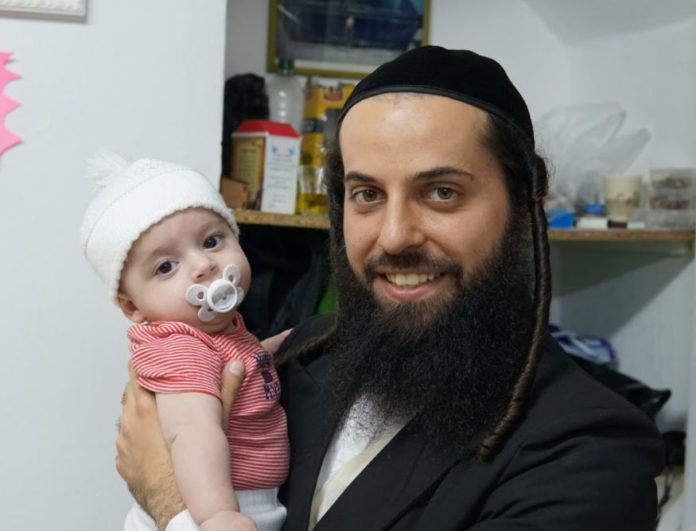 Refael Aharon has lived an extraordinary life of self-sacrifice for the greater good. First, he joined the IDF to protect its people despite not being Jewish himself. Wanting to serve Hashem to the best of his abilities, he converted to Judaism. Although it was a very difficult and often lonely process for him, he was never one to take the easy way out. He joined a Yeshiva, becoming a Talmid Chacham, and soon entered the role he is most proud of: being a husband and father of two precious babies.

Rafael and his wife Ranit, a special Baalat Teshuva from Bat Yam, moved to Yerushalayim several years ago to start a Jewish family in a Torah environment. He continued learning full time while his wife found a good paying job. By living frugally, they were hoping to save for their children’s futures.

When Ranit became pregnant with her daughter Sara Edel she was fired and could not find another job. Two months after giving birth, she became pregnant with Nachman David and couldn’t find anyone willing to hire her. Right when she was due to give birth, the Covid 19 virus hit the economy and finding a job became a daunting task. After 2 years of no income, the family’s savings are spent and they have no idea how they will pay rent for their small apartment or how they will put food on their table.

To make matters worse, both of their babies have reflux and require expensive formula which they can ill afford today. Unlike many, they do have neither family help nor any support network to lessen the burden.

Refael has accomplished much in life despite the adversity but even that has not prepared him for his gravest challenge; the fear that his precious babies won’t have any food to eat.

No donation is too small to help Refael feed his family. All donations are tax-deductible and fulfill the Mitzvah of Tzedakah and “Loving the Ger.” Click here to learn more.