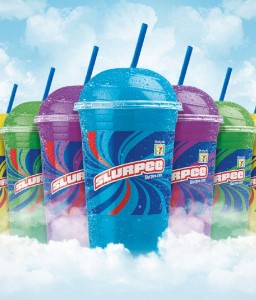 This article is for informational purposes only, as always check with your Rav.

Are Slurpees kosher without a Mashgiach?

As the 7-11 chain prepares to hand out millions of free Slurpee’s on the corresponding date, their Jewish patrons will surely be out to get their fair share. And for those lucky communities whose branch has a Mashgiach to ensure the Kashrus, there’s obviously no question. But what about the rest; do they have to forgo this annual event?

What makes something Kosher?

The American consumer is accustomed to “Kosher” being defined by the presence of a Kosher symbol or certificate. Hence the confusion when encountering a product or situation without one. But what really is necessary to make something Kosher? The reality is that Kosher is not some positive “Blessed-by-the-Rabbi” thing. Anything that we can ascertain is not positively non-Kosher will by default be Kosher. This is why Chazal [Avoda Zara 38, 39] approached the Kashrus of a product as במאי ניחוש לה, i.e. what is there to worry about? The Gemara will then list the possible issurim that may be involved, check them against the facts, and if all works out then it’s Kosher.

So why the Kashrus Organizations? As modern food production gets more and more complex, both the facts and the possible issurim are increasingly difficult to ascertain. For example, in the times of Chazal bread was basically flour and water and could be bought from a non-Jew without fear of adulteration. Today a basic loaf of bread has a multiplicity of ingredients, many of which are themselves compounds, and having gone through any number of processes. A large team of experts is required for all the necessary research and fact-finding; qualified Rabbanim are needed to figure out the possible issurim. Together they provide an educated במאי ניחוש לה.

So let’s take a look at the Slurpee’s in question and make our own educated במאי ניחוש לה, what do we need to be worried about. As far as ingredients, most of the common flavors are verifiably kosher. First step is therefore to verify that your intended flavor is indeed certified Kosher. This can be done by a quick perusal of your favorite Kashrus Organization’s website or up-to-date listing. Keep in mind that some are certified dairy.

Being that there is no heat involved in its preparation, we can safely rule out any problems of Bishul Akum [non-Jewish cooking] and Giulai Akum [non-Kosher vessels]. All that now remains is to ascertain that the slush in your cup is comprised of [only] those very same ingredients. Although the placard on top says “Coca cola”, there are still two other possibilities. One, it may have been mixed with the remainder of a previous possibly non-Kosher flavor, as 7-11’s admittedly do not clean the machines in between flavors. Two, maybe it’s not Coca cola altogether, rather some cheaper off brand cola with who-knows-what ingredients.

The sign is Kosher, but what’s in the cup?

Regarding the possibility of being mixed with another flavor, we can definitely assume that any issur would be Battel B’shishim. None of the non-kosher flavors contain enough issur that the small amount of it that mixed in [without affecting the taste] wouldn’t be battel in the resulting mixture. Although for various reasons Kashrus Agencies usually will not certify anything that relies on bittul, that does not detract from its factual Kosher le’chatchila status.

The last possibility, that it isn’t the certified brand altogether, is more challenging. While we do not suspect a non-Jew of switching things out of spite, where there is a monetary benefit we certainly have our doubts. In that case, the certified product in the hands of a non-Jew would need a Halachic Chosam (seal), which the Slurpee machines do not have. Some agencies recommend checking the syrup package connected to the machine, but it’s difficult to understand how that helps on an unsealed package. The package may well be kosher but its contents may not be. After enough customers come in asking to see it, one can be sure the proprietor looking to save a few dollars will switch the packaging. To rely on a “mirsas” of the franchise company is also problematic, because there seems to be confusion as to whether and when they are allowed to sell off brand stuff, with some of them openly stating that it is not against the rules. [As opposed to commercial soda fountains which are owned by the parent companies and very carefully regulated.] If we can’t even figure it out, certainly the guy who owns the store isn’t too worried about it.

So we go back to basics. The Shulchan Aruch (Y.D. 63:1) permits unmarked meat found in the hands of a non-Jew in a city that most of the meat is sold by Jews. This is the good old principle of Majorities. Although non-Kosher meat is cheaper than Kosher, still the majority rules. Applying that to Slurpee’s, no one can deny that the vast majority of these drinks being sold are of the [kosher] name brand variety. In fact many of the off brands are actually Kosher as well. Which leaves us with the inevitable במאי ניחוש לה, we have every right to assume that if the name brand flavor is verified to be Kosher, and the placard proclaims it to be that flavor, and it looks, smells and tastes like it, it probably is it. [A word of caution: The Halachos of majorities are of the most complex, and while the application is true in the current case, any slight variant can change the Halacha.]

Having said all that, it’s true and undeniable that it is Halachically Kosher. At the same time it is not the standard of Kosher we’ve become accustomed to in our society. Should we overlook that for the sake of the perfect brain freeze? And if there are Jewish stores in your local area that serve more or less the same? We will leave that an open question, because the answer is totally subjective.

While we’re on the subject…

One more semi-related point. Chazal tell us “Don’t look at the vessel, rather at its contents” [avos 4, 20]. An open milk bottle in a non-Jewish store without an official Mashgiach should not be considered Chalav Yisroel. Whether it would be worth their while to exchange it is immaterial, for that just makes it what we call Chalav Stam. To be Chalav Yisroel it would either need to be sealed, or have a Mashgiach who is יוצא ונכנס to create the proper mirsas [see Y.D. 115:1 & 118:1]. So for those commendable Yidden who are makpid on exclusively drinking Chalav Yisroel, look for a sealed bottle.

Please note this article has extensive Halachic footnotes omitted for the sake of brevity. They are available upon request.