[Photos and videos below.] It is with great sadness that we report the passing of the Lelover Rebbe, Rav Shimon Nosson Nota Biderman zt”l, last night, after Maariv of leil Yom Kippur. Shortly after davening, the Rebbe went from his bais medrash to his private room where he recited Krias Shema before he passed out. The Rebbe had davened Kol Nidrei for the amud, but was too weak to continue for Maariv.

Medical personnel immediately arrived and tried to revive him. He was taken to Beilinson Hospital in Petach Tikvah, but his petirah took place shortly thereafter. 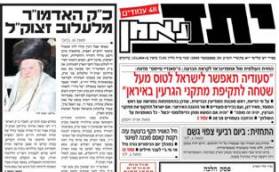 Shock and disbelief spread across the chareidi kehillos of Eretz Yisroel as the news spread both today and at the conclusion of Yom Kippur, and some 30,000 people gathered for the levaya, at 9:30 o.m. Motzoei Yom Kippur, at the Lelover Bais Medrash in Bnei Brak on Rechov Breuer. The levaya was then to resume at the Lelover Bais Medrash in Yerushalayim, where kevurah was to take place on Har Hazeisim. As is the minhag during these days of Tishrei, no hespeidim were said at the levaya.

Following the petirah, a driver arranged by the Ezer Mitzion organization drove the niftar back to the Lelover bais medrash, where Tehillim was said at the side of the aron in the Rebbe’s room for the duration of the day.

The Rebbe was born on 6 Teves 5691 (1931) to Rav and Rebbetzin Moshe Mordechai of Lelov zt”l. He first learned at Talmud Torah Chayei Olam in Yerushalayim and later enrolled in Yeshiva Sefas Emes. A gadol in Torah and chassidus, the Rebbe devoted his life to Torah and avodas Hashem. He authored sefer Har Bashan on the Rambam.

In 1973, the Rebbe settled in Crown Heights, NY, where he learned for thirteen years before returning to Eretz Yisroel to take over as head of the Lelover chassidus upon his father’s petirah.

The Rebbe, who led the Lelover chassidus for 22 years, leaves behind nine children, three sons and six daughters.

For photos of the levaya, see below:

Saying Tehillim at the side of the aron: