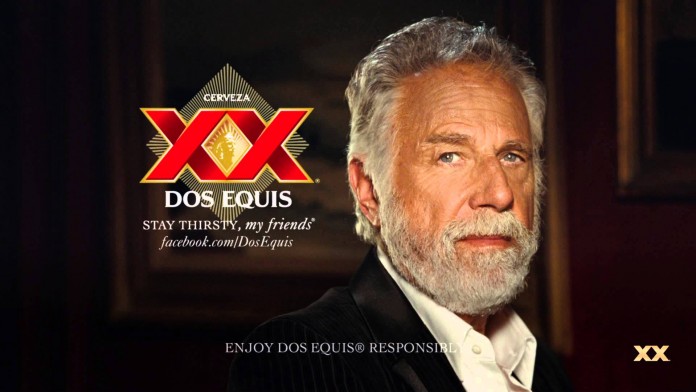 Nine years ago, Dos Equis was an all but unknown brand. Then the Heineken-owned Mexican beer launched a suave, self-assured campaign with a spokesperson possessing those qualities and more.

In 2007, Dos Equis introduced us to the “Most Interesting Man in the World.”

The persona was a straightforward, whimsical one: an older, Spanish-accented man who did it all, and did it better than anyone else. His grey hair distinguished him; his perpetually arched left eyebrow gave him an air of exquisite discernment.

“His presidential run will be a sprint. But he will be running”…”He’s won the same lifetime achievement award twice”…”He once had an awkward moment, just to see how it feels.”

Then came the tagline: “I don’t always drink beer, but when I do, I prefer Dos Equis.”

Sales soared alongside the Most Interesting Man in the World’s growing celebrity. Through the turbulent late aughts, he became a symbol of constancy — he was always there with a chilled lager and a bearded grin.

But nothing gold can stay, not even the face of the Most Interesting Man in the World.

Dos Equis announced in a series of ads this Wednesday that Jonathan Goldsmith, the 77-year-old who has represented the brand since the start of its Most Interesting Man campaign, will no longer appear in their familiar commercials.

In classic Dos Equis fashion, this change was revealed in videos showing Goldsmith departing for a “one-way mission” to Mars.

“Get a last look at this brave pioneer who will not be returning,” the voiceover says as a line of fawning admirers in various cultural garbs wait to bid him farewell. “His only regret is not knowing what regret feels like.”

Away he goes. His rocket’s takeoff is watched by Dos Equis-drinkers all over the world. As he blasts through the stratosphere, the silhouette of a wolf howls at the sky, and his blessing — “Stay thirsty, my friends” — echoes across the Earth in his absence.

Andrew Katz, the brand’s vice president of marketing, said the actor would be replaced in order to reflect how society has transformed over the years.

“Culture has changed very dramatically,” Katz told USA Today. “Our Millennial drinker has changed quite dramatically, and the competition has only exploded with the advent of craft [beer]. We just want to make sure that the story evolves.”

The title of the Most Interesting Man will remain, but it will be given to someone else.

Far from suffering an identity crisis, Goldsmith seemed at peace with his ejection from the planet.

“I feel terrific, I really do. I’ve had a great time in the last 10 years,” he told the Associated Press, adding that the end of this role will allow him to consider other opportunities.

While Dos Equis was nothing before Goldsmith, the same may be said of the actor before the brand.

Goldsmith grew up in the Bronx. After moving to Los Angeles to try to make it, he worked as a garbage truck driver.

“It wasn’t easy,” Goldsmith told NPR. “Jewish boys that grow up in New York are not that adept at riding horses.”

Dos Equis changed that. As the Most Interesting Man in the World, Goldsmith’s face achieved meme-like levels of recognition. It became a game to mimic his hyperbolic, yet understated turns of phrase.

“It’s overwhelming recognition,” Goldsmith told the AP. “I would be literally mobbed.”