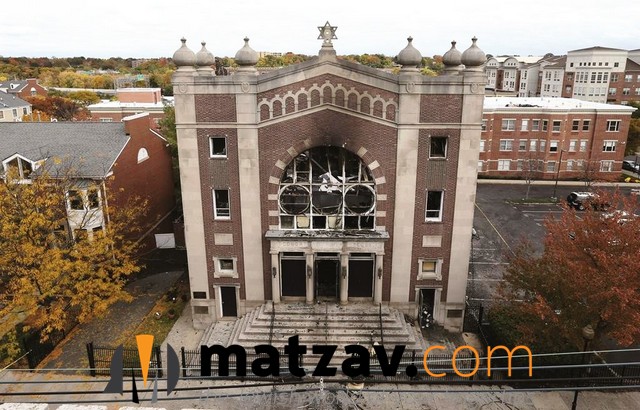 It took me three days to build up enough courage to visit what remained of Cong. Poalei Zedek in New Brunswick, New Jersey. What was once a stately and ornate structure had almost instantaneously become a burnt-out shell.

In less than one hour on Erev Shabbos Parshas Lech Lecha, a quick burning electrical fire consumed the majority of the interior of this once magnificent shul. A structure that stood proudly for close to one-hundred years was now reduced to charred rubble. I sadly surveyed the exterior façade and made my way to the ground floor door that I had passed through so many times before. I was hoping to get a glimpse of the interior space to gain some perspective of the enormity of the destruction. To my amazement, beyond the police tape in the dark and damp lower shul stood Rabbi Abraham Mykoff, the long-time rov and lifeblood of this storied shul. He motioned for me to enter, yet warned me to be vigilant of where I walked.

The damp and dingy smell was overwhelming. Water still dripped off of the few charred crossbeams that had somehow remained in place. It was an eerie feeling. I stared straight ahead to the eastern wall, hoping that there would be some semblance of an aron kodesh, which, I recalled, had such a unique old-world charm, yet all that was left was the blackened brick frame outlining where the Sifrei Torah were once housed.

Ten Sifrei Torah were lovingly ensconced in this aron kodesh – some over 100 years old – yet only one survived the fire. It was hurriedly removed by the rov as the fire raged above. With profound sadness and a sense of helplessness, the rov knew that the others could not be saved, for as he ran from the shul, the ceiling began to collapse behind him.

The rabbi and I carefully climbed the rickety stairs to the upper level, where the main sanctuary once was. The rows of wooden benches that had supported so many downtrodden Yidden and their tear-filled tefillos could barely be discerned.

I looked up at the front wall where the handmade stained glass windows once allowed prisms of light to shine through. It was now just a hulking shell of mangled steel and wood, completely exposed to the elements.

The elevated and elaborate bimah, which had experienced the joys of bar mitzvah boys and chassanim, of Simchas Torah and Matan Torah, had simply collapsed through the floor. The amud, which shared its space with many noted chazzonim and baalei tefillah, was summarily swallowed up by the intense heat of the fire.

As we turned to leave, I noticed Rabbi Mykoff’s glossed-over, teary blue eyes. It was as though they were staring off into the distant past, trying to recall all of the joy and elation he had experienced from his seat beside the aron kodesh.

The ezras noshim’s steel beams still stood proud, more than likely supported by the heartfelt tefillos of the noshim tzidkaniyos who had, with strong conviction, cajoled their husbands and children to make the shul experience a part of their Jewish identity, even if they were not the most versed of people.

Upon exiting the main sanctuary, we both could not help but notice the charred yahrtzeit plaques. Surely, many of these names were of people who had experienced their own fires of gehennom, either in Siberia in the Russian gulag or through the fiery inferno of the        Holocaust.

As we returned to the lower level, I slowly made my way to the mizrach wall to try and immerse myself in the full experience of what had taken place. As I began to say a kappitel of Tehillim, I was overcome with emotion. Surveying the scene and trying to comprehend the enormity of the loss, I looked down at the charcoal strewn floor and noticed what seemed to be a small burnt piece of klaf. I affectionately picked it up and began to read the few words that were slightly legible on it: “vesomachta bechagecha – and you shall rejoice on your [Sukkos] festival.” Sukkos could very well have been the last time that the baal kriah read from this Sefer Torah. Now it would be buried – only a few weeks after the Yom Tov of Sukkos – next to the other Sifrei Torah that had been its neighbors for all these years. Finding this remnant had even more meaning to me, as Parshas Re’eh was my bar mitzvah parshah.

I placed the klaf carefully on the table with the other parchments and mantelach that were found, together with a small number of silver ornaments that the fire had not completely melted. It was a heartbreaking scene surveying the table that now held the atzei chaim of these holy Sifrei Torah. The “osiyos,” the letters, were now “porchos ba’avir,” flying aloft, heavenward. The table, though, also reminded me of much better times we experienced at the shul.

A few years back, the shul hosted college students from Rutgers University each Tuesday night as part of the Rutgers Jewish Experience (RJX) program. The program matches students with local – Highland Park and Edison – affiliated men and women, giving the students a chance to partake of the sweet taste of Torah. Each night’s program was preceded by an informal gathering in the lower shul, where the students enjoyed pizza, Chinese or sushi around these very tables.

This time spent together also gave everyone an opportunity to get to know each other in a relaxed atmosphere and allowed us to build lasting friendships. These informal gatherings would invariably lead to an invitation to join our families for a Shabbos meal, fostering a greater appreciation of the beauty of Yiddishkeit. A substantial number of these students ultimately ended up learning in yeshivos and seminaries in Eretz Yisroel, and some have even returned to Raritan Valley to marry their bashert and build their homes within the frum community.

The RJX program was hosted by the shul for three years until it returned to the college campus due recruitment constraints. Yet, the sounds of the lively interchange between student and mentor still echoed through the vast main sanctuary and, somehow, the rickety old wooden benches and shtenders and the eighty-plus-year-old structural frame of the building did not seem to be that old anymore. It may have looked a bit aged, but it pulsed with the heartbeat of a young and vibrant constituency and the sounds of a living and breathing Torah.

Given its close proximity to Robert Wood Johnson University Hospital, many guests from the more-established frum communities in the tri-state area would invariably find themselves being welcomed into the shul with a warm smile and handshake from the rabbi. Many Lakewood yungeleit will fondly recall being given an aliyah and naming their child from the bimah at Poalei Zedek.

I offered the rov my assistance and he readily accepted, with the caveat that he was unsure at this point what exactly needed to be done. In the coming days, Misaskim will arrive to sift through the rubble and locate any tashmishei kedushah yet to be uncovered, which will then be followed by a levayah for the Sifrei Torah in the shul’s own cemetery plot.

The one-hundred families who have called Poalei Zedek their home-away-from-home will need to find a temporary location to rest their weary heads. Many are elderly Russian-speaking families who relied heavily on Rabbi Mykoff’s guidance and solace. The shul was a focal point in their lives.

The greater Raritan Valley community, still reeling from this tragedy, will turn to its rabbonim for the proper guidance and pathway to introspection. When such a misfortune happens so close to home, it behooves us as Yidden to revisit our priorities and endeavor to better ourselves and the lives of those around us.

In the interim, Rabbi Mykoff and the shul board will need to also assess the financial realities and the fact that the shul was not able to insure itself these past few years. What is certain is that the shul will welcome any donations to help defray the cost of cleanup as well as maintain some connection to the shul’s membership. Donations can be made payable to Cong. Poalei Zedek and mailed directly to the shul at P.O. Box #166, New Brunswick, NJ 08903, or at https://www.gofundme.com/rebuildorshul.

As I turned to leave, Rabbi Mykoff said to me with a firm voice, “Kol mah d’ovid Rachmana letav ovid. All that Hashem does is for the good. Moshe, this, too, is for the good. You will see.” 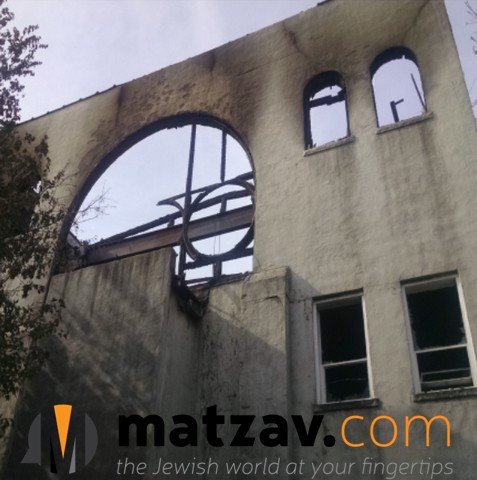 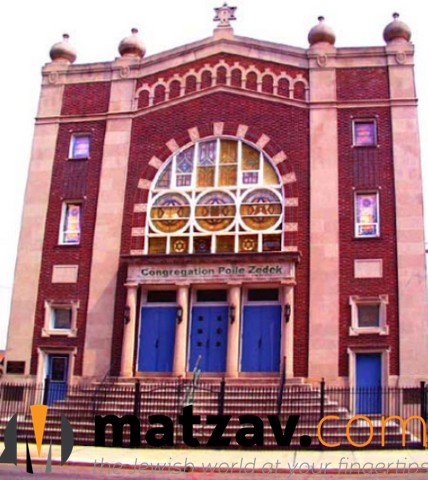 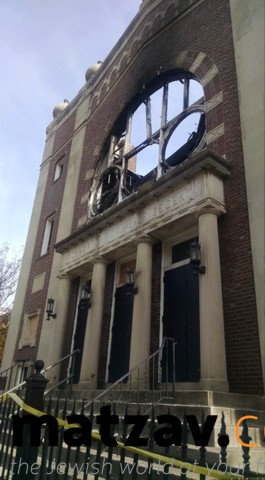 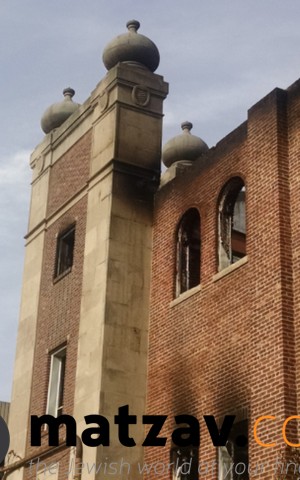 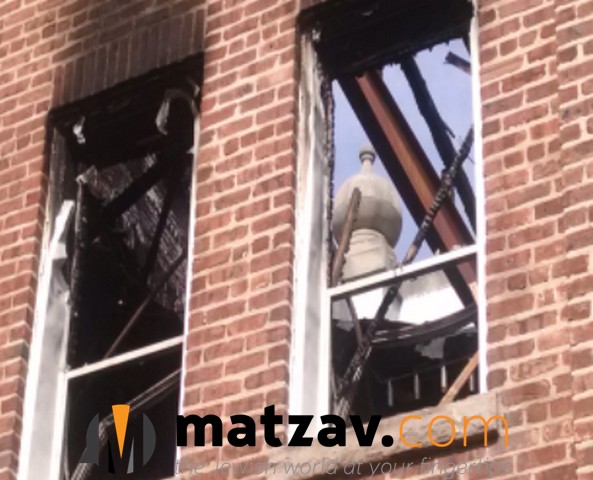 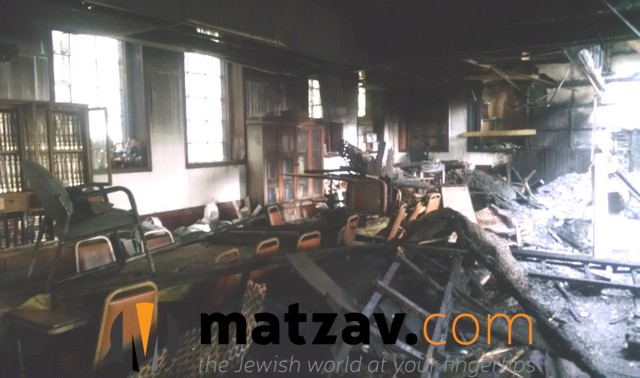 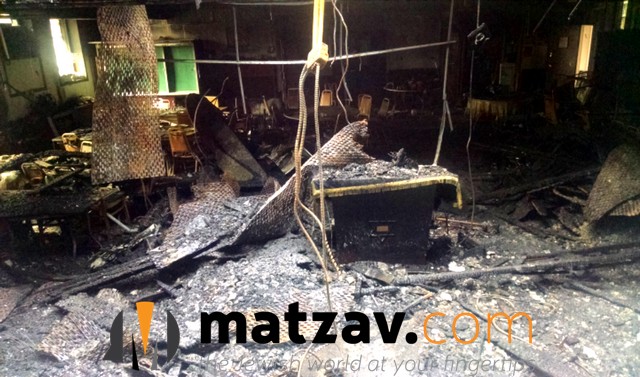 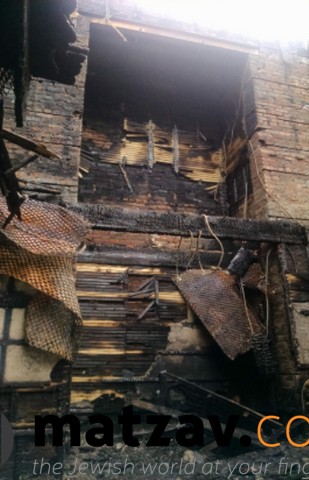 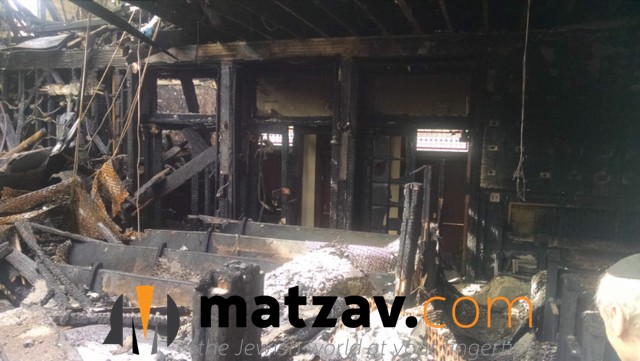 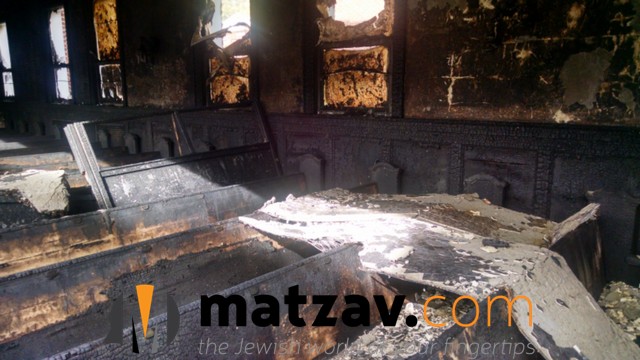 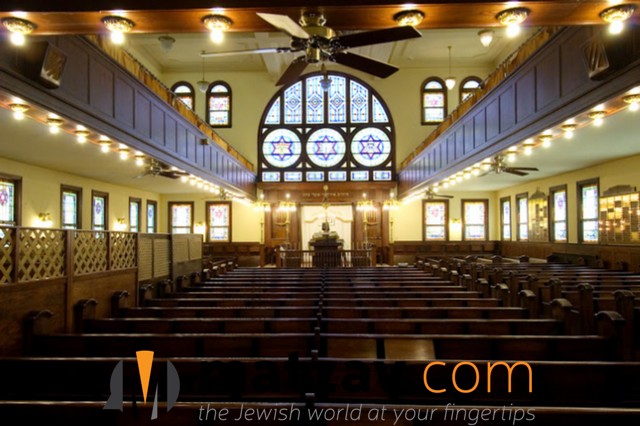 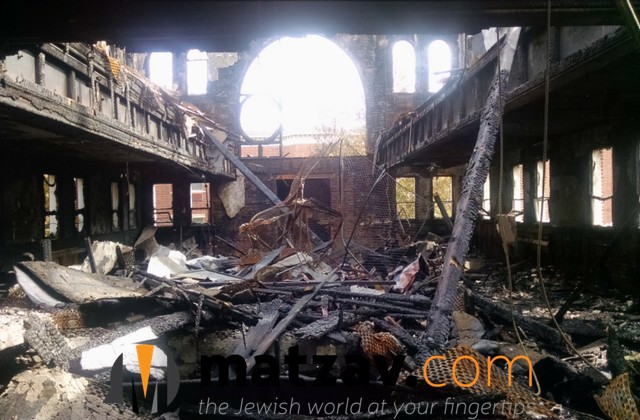 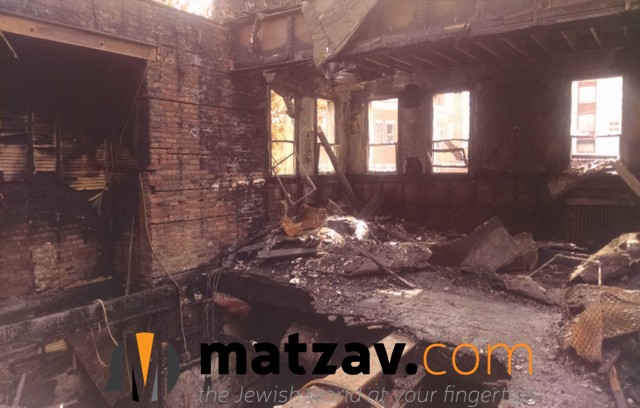 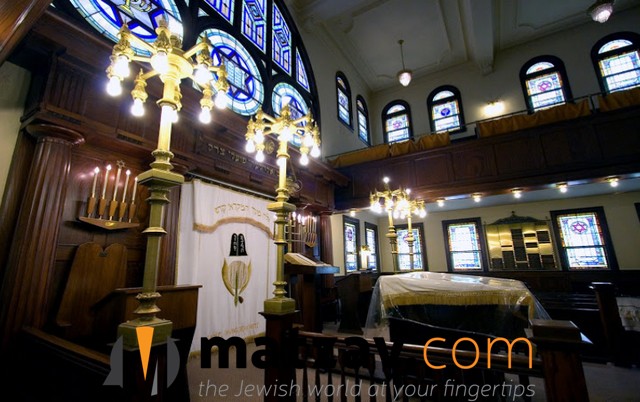 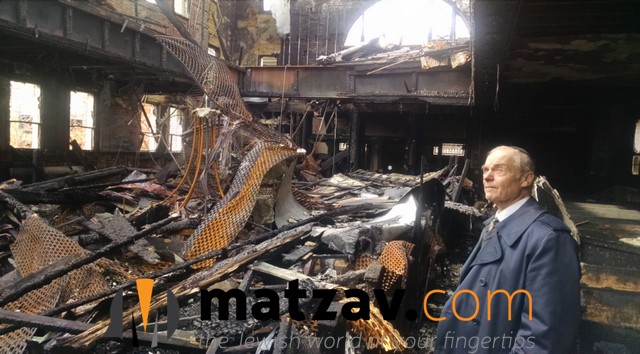 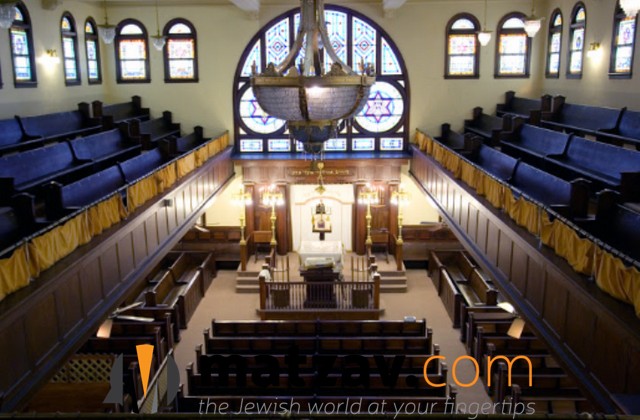 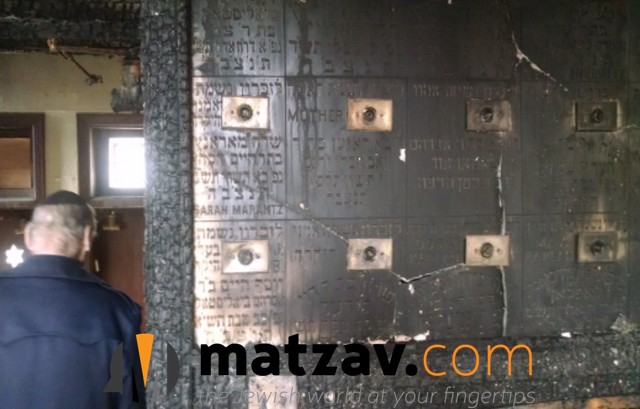 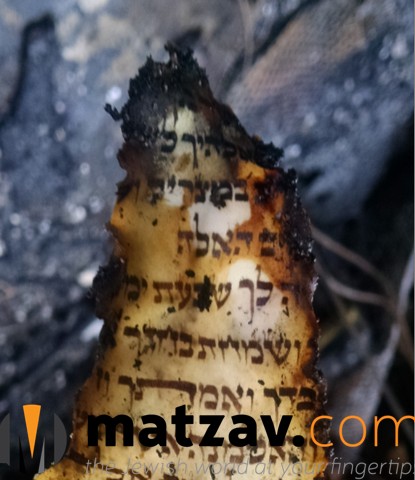 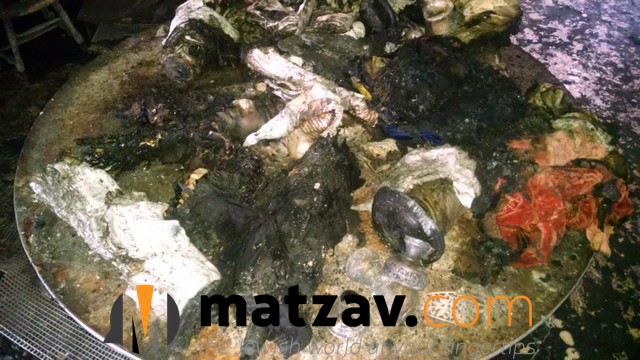