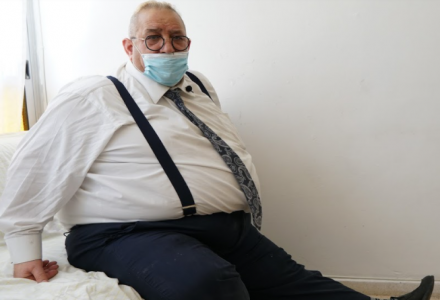 Rabbi Berger was a hardworking Talmid Chacham who became the respected Rav of a flourishing kehillah in Eretz Yisrael. He helped many people in this capacity but he had a yearning to also help Jews outside of his community, particularly those who had been “forgotten” about for decades.  He travelled regularly to Eastern Europe, spreading yiddishkeit. He was happily married with two great kids. He had good enough parnassah to marry off his daughter. At the wedding, the proud father was beaming from ear to ear. He was having the best day of his life. At the chuppah, little did he know it would be the last time he would feel joys for decades because before the night was over, his life collapsed and he was about to lose everything he had worked hard for.

At the wedding, Rabbi Berger’s wife was dancing with the kallah when she collapsed suddenly and was rushed to the hospital. The doctors spent a year trying to save her life. Much of the treatment wasn’t covered by national insurance. The desperate husband had no choice but to go into debt. In the end, she passed away. Although she was gone, the debt remained.

Soon after, the widower’s son got sick too and this created more medical bill debts. His life was quickly deteriorating, though he continued to work hard to stay afloat. His continuing work to help many Jews worldwide brought him consolation.

Soon that was taken from him as well. The Rabbi became afflicted with a rare disease that causes severe, life-threatening obesity. Even simple routines,  like getting out of bed to go to the bathroom, causes his body a lot of pain and stress. There is a life-saving surgery in which doctors are confident will restore his health, but it is expensive. He has already liquidated his assets, including his home, to survive, and he is left with no money, only debt. In fact, his landlord recently told him “Either you pay everything you owe me or I will make sure you become homeless; it’s your choice.” Unfortunately, the “choice” is no longer the Rav’s to make.

The good news is Rabbi Berger’s condition is treatable. If he receives it, he will likely be able to return to a life of self-sufficiency. This is pikuach nefesh. Halacha gives Talmidei Chachamim living in Eretz Yisrael first priority for receiving tzedakah. One who helps to give his life back will be rewarded tremendously while continuing to receive zechus for every mitzvah Rabbi Berger is able to perform with his new gift of life. To learn more, click here.