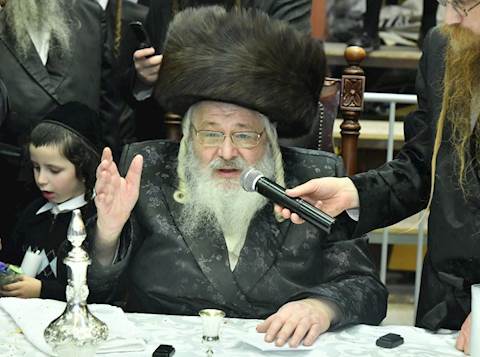 It is with great sadness that Matzav.com reports the petirah of the Shomrei Emunim Rebbe zt”l after contracting the coronavirus. The rebbe, Rav Refoel Aharon Roth zt”l, passed away at the Laniado Hospital in Netanya. He was 73.

Before Tisha B’Av, the rebbe was taken to the hospital with severe breathing difficulties as a result of the coronavirus. The rebbe was anesthetized and resuscitated. In recent days, his body systems collapsed and this morning the rebbe was niftar.

The rebbe was born on the 17th of Cheshvan in 5708. His father, the Chukei Chaim of Shomrei Emunim, was a son of Rav Aharon Roth, author of Shomrei Emunim. His mother, Rebbetzin Batya Chaya, was a daughter of the late Rav Mordechai Goldman of Zvil, author of the Yikra D’Malka.

The rebbe’s sandek was Rav Gedaliah Moshe of Zvhil and he was named after his grandfather, Rav Aharon Roth.

In his youth, the rebbe studied at the Shomrei Emunim Yeshiva in Yerushalayim and received semicha from Rav Shmuel Tobias.

The rebbe first served as rov of the Shomrei Emunim kehillah in Ashdod. After his father passed away on 4 Elul 5772, the rebbe was appointed to follow his father’s path at the Bnei Brak kehillah of Shomrei Emunim where he was crowned as rebbe.

The rebbe was known for his tefillos and righteousness, and many flocked to him for hadracha, advice and brachos, and to hear his divrei Torah and chizuk.

The rebbe re-established Yeshivas Shomrei Emunim in Bnei Brak and chose the name Yeshivas Toras Avrohom in memory of his father. The rebbe also established the Chasdei Chaim tzedakah fund for needy families.

The rebbe leaves behind a beautiful family of 12 children and many grandchildren who continue in his path. His brothers are the rebbes of Shomrei Emunim in Yerushalayim, Ashdod and Kiryat Gat, and his brothers-in-law are the admorim of Dezh and Sambor.

The levayah is being held this afternoon at his bais medrash in Bnei Brak. It will then pass the Shomrei Emunim bais medrash in the Meah Shearim neighborhood of Yerushalayim and from there will proceed to Har Hazeisim for kevurah.