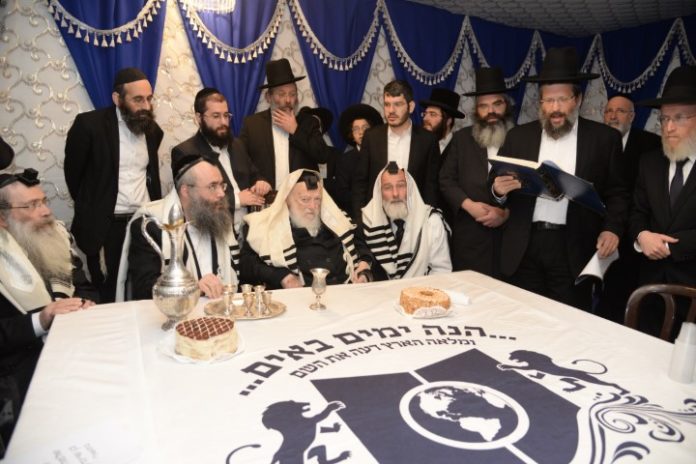 An inspiring siyum held earlier this month at the home of HaGaon HaRav Chaim Kanievsky, shlita, was the first of the many siyumim that will be held by Dirshu as they celebrate the Dirshu World Siyum with massive siyumei Shas in large Jewish Centers. The siyumim to be held in stadiums from Yerushalayim and Tel Aviv, to Manchester, Paris, Johannesburg and more, will culminate in the grand finale of the world siyum at the Prudential Center and NJPAC in Newark, NJ, where the accomplishments of the lomdei Dirshu will be hailed and publicly recognized.

The siyum on Masechta Middos at the home of Rav Chaim was divided into two parts. Dirshu’s nesius gathered at Rav Chaim’s house in the evening where the Vizhnitzer Rebbe, Rav Boruch Mordechai Ezrachi, the Sanzer Rebbe and Rav Dovid Hofstedter gave addresses. Rav Chaim, who was not feeling well, asked that the mamad continue in his house without him and asked the leaders of Dirshu to return to his home the next morning after vasikin davening.

He also sent his son, Rav Yitzchok Shaul Kanievsky, with a letter that was read publicly at the maamad. The letter from Rav Chaim said, “…The Mishnah Berurah takes great pains to tell us that a person should never neglect a set time for learning… it is therefore incumbent on us to thank Dirshu which for decades has promoted the learning Shas, Mishnah Berurah and Shulchan Aruch….”

In the evening, the siyum was made by HaGaon HaRav Boruch Dov Diskin, shlita, Rosh Yeshivas Orchos Torah. Rav Diskin also serves as Dirshu’s head of testing and marking. The siyum after vasikin davening with Rav Chaim was made by Rav Uri Kessler, one of the Kinyan Torah test composers.

The world of Torah observant Jewry greatly anticipates the numerous Dirshu siyumim to be held throughout the globe that will increase lomdei Torah and serve as  a vehicle for a colossal kiddush Hashem.