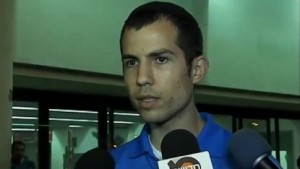 One of the Israelis who rushed a knife-wielding terrorist after he stabbed four people on Sunday night recalls how the man would not stop trying to attack even though he had been brought down.

“I heard a car stop, and saw a young man get out and start stabbing people,” Benayahu Arazi told Channel 2 television from the Hillel Yaffe Medical Center in Chadera, where he was taken after the attack, which occurred on Route 65 at the entrance to the kibbutz of Gan Shmuel, near the northern city.

“I work at Gan Shmuel, I was on my way home — and then I heard the sound of a car breaking suddenly. I saw a man beating and stabbing a young girl,” he said.

The stabber, a 20-year-old Palestinian from the Jenin area of the West Bank and living in the northern Israeli Arab town Umm al-Fahm, injured four people before he was arrested. One of the wounded was a 14-year-old girl.

“The young girl was shouting ‘help me’ and I saw that she had been stabbed in the shoulder. She was really brave as even though she was wounded, she signaled for people not to approach,” Arazi said.

He recalled that an Israeli man pulled up in his car shortly afterwards and started to struggle with the terrorist.

“He brought him down. There were three of us who fought the terrorist, we got him on the ground. He was determined to turn around and stab (us), he would not let up and was going crazy throughout.”

He said that it was at this stage that the security forces arrived and put the terrorist in handcuffs.

“The girl had told me that he had stabbed two other soldiers. When I saw the attacker had been restrained, I looked for the soldiers and I saw the woman soldier who had been very seriously wounded in the face. We stayed with the soldier in the field until Magen David Adom rescue personnel evacuated them to hospital,” the witness said.

According to Army Radio, the attacker first ran over the 19-year-old female soldier, before getting out of the car and stabbing her and the three other victims.

The woman was evacuated to Hillel Yaffe Medical Center, with stab wounds to her head and upper torso.

Two other victims, a 14-year-old girl with moderate wounds and a 20-year-old man who was lightly hurt, both arrived at the hospital under their own steam. A 45-year-old man also sustained hand wounds in the attack.