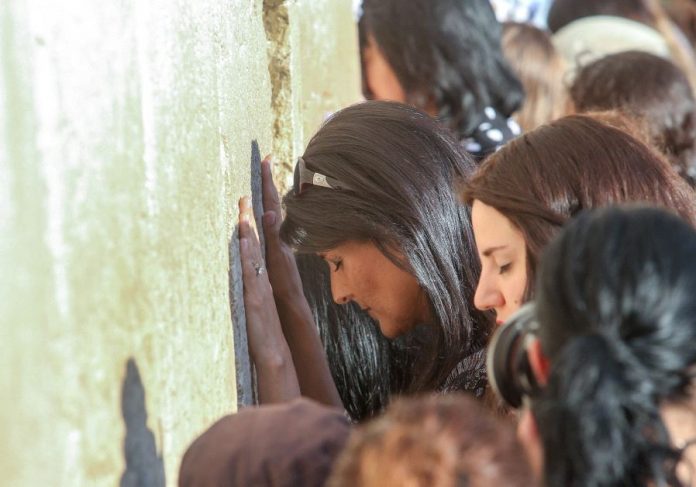 As she received a hero’s welcome, U.S. Ambassador to the United Nations Nikki Haley told Israeli Prime Minister Benjamin Netanyahu in Jerusalem on Wednesday that Israel faces bullying at the U.N. – and she has no patience for it.

Haley arrived in Israel one day after threatening to withdraw U.S. participation in the United Nations Human Rights Council unless it changes its ways in general and its negative stance on Israel in particular.

Haley, a former South Carolina governor often touted as a future Republican presidential candidate, has focused heavily on what she calls the mistreatment of Israel during her six months at the U.N.

Her vocal efforts have made her the darling of Israeli leaders, as well as endearing her to conservative U.S. pro-Israel organizations.

“Thank you for all your help and standing up for Israel, standing up for the truth,” Israeli Prime Minister Benjamin Netanyahu told Haley in statements following their meeting in Jerusalem.

He said that with backing from President Donald Trump, Haley had begun to “change the discourse” on Israel within the international forum headquartered in New York.

“You know, all I’ve done is to tell the truth, and it’s kind of overwhelming at the reaction,” said Haley. “It was a habit. And if there’s anything I have no patience for is bullies, and the U.N. was being such a bully to Israel, because they could.”

Haley said that she has started to see a change in attitude toward Israel in the United Nations, a body that Israel has consistently complained is overwhelming against it, mostly over its 50-year occupation of the West Bank and its day-to-day treatment of the Palestinians.

Israeli leaders are hopeful that with Haley’s support, backed by the Trump administration, there will be a change in the way Israel is treated at the U.N.

At a meeting of the Human Rights Council in Geneva on Tuesday, Haley said the United States was “looking carefully” at its participation in the council and she lambasted it for allowing countries involved in human rights abuses to remain members while maintaining what she called “chronic anti-Israel bias.”

“It’s hard to accept that this council has never considered a resolution on Venezuela, and yet it adopted five biased resolutions in March against a single country, Israel,” she said.

Haley will spend three days in Israel, where she is slated to visit the Yad Vashem Holocaust memorial, spend time in Tel Aviv and take a helicopter ride to Israel’s border with the Gaza Strip. She will also meet with Palestinian leaders, Israeli media reported.

“We are honored to welcome you to our country and thank you for standing resolutely by our side,” Israel’s Ambassador to the U.N. Danny Danon said at a welcoming ceremony for the American diplomat.

Danon will accompany Haley throughout most of the trip, except during her meetings with the Palestinians and while she makes a private tour of Jerusalem’s holy sites.

He said that with help from Haley and the current U.S. administration, “Now is the time to enact real reforms at the U.N. so that it will reflect Israel’s true stature in the international community.”