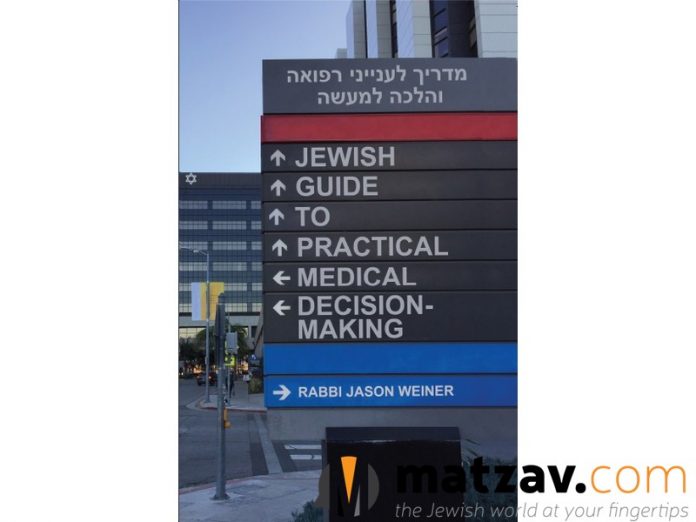 “Most challenging issues that arise in hospitals today cannot truly be categorized as “problems”. Problems have answers. The challenges we face in medical care in the modern age are more accurately classified as “dilemmas”, as there is generally no one simple solution, but rather a number of difficult alternatives… How can Jewish Law provide practical guidance on these very complex challenges and questions? The answer comes in the eternal relevance of the Torah and the adaptability of the Talmudic legal system.”

When Rabbi Yehudah Leib (Jason) Weiner began his career as a rabbi in Los Angeles, he was not expecting a career as a hospital chaplain. Yet when Rabbi Wiener was called upon to fill in as chaplain for another rabbi, he experienced the ability to play a meaningful role in the lives of others. As the chaplain of Cedar-Sinai Medical Center, he was involved in some of the many complex cases, which require communication between the medical team and family with its rabbinic advisor.

In order to facilitate this understanding, Jewish Guide to Practical Medical Decision-Making sets as its goal to clarify the halachic principles involved as well as Jewish ethics, so that both the doctors and the patient can understand each other and work in unison. The author emphasizes that he is not attempting to rule definitively in such matters, and stresses that these matters must be decided in conjunction with a rabbinical authority who is conversant in this subject. In addition, the topics discussed were faced frequently by Rabbi Weiner throughout the years, and he had the opportunity to discuss them with Rav Asher Weiss and Rav Zalman Nechemia Goldberg. Through meetings and correspondence Professors Abraham S. Abraham and Avraham Steinberg, he received clarification of the rulings of Rav Shlomo Zalman Auerbach, which enjoy wide-spread acceptance amongst contemporary rabbonim in the realm of medical decision-making.

Rabbi Weiner begins by setting down the need for proper communication as the basis for cooperation between the parties, as there must be an understanding of the Jewish view of ethics and its regard for the sanctity of life. By contrasting the secular opinion which concentrates on the value of life, as opposed to the Jewish view which venerates its sanctity, we and the medical community come to appreciate our dedication to preserve life. Furthermore, the difference between pain, which is explained as physical discomfort, as opposed to suffering, which denotes sensations which are more emotional or spiritual in nature, helps lay the groundwork for some of the profound variances is the manner in which secular caregivers and ethicists view their obligations vis a vis the Jewish approach.

This contrast is evident in the divergence of opinion concerning informing a patient about their medical condition. While the medical community strongly favors disclosing the entire diagnosis and prognosis in the name of patient autonomy, halachah views this differently. Tiruf hadaas, causing acute mental anguish, is something that halachah requires to be taken into account in order to avoid causing a decline in his condition. Indeed, halachah sometimes proscribes us from informing a dangerously ill person about the demise of a close family member, even if by withholding this information he will not be able to observe aveilus. Thus, there are grounds to conceal the dire condition from the patient in order to put his mind at ease.

Yet in our modern medical settings, suppression is not always warranted or possible, since providing care more often than not require the consent of the patient. For this reason, others suggest that the medical team first reveal the information to the close relatives, and only then collaborate with them in relaying this to the patient in the most appropriate manner. Even in a dire situation where treatment will shift from curative to one of comfort measures, some level of hope should be encouraged.

A short but relevant chapter deals with undergoing risky or experimental procedures which may be curative or extend life, yet involve a risk of shortening life. Although one is permitted to undergo some measure of risk in order to cure illness, nevertheless the question arises concerning performing procedures which are particularly risky, which when unsuccessful may actually shorten life. The variables in such situations are many, including the consensus of the doctors for the need to perform it, the consent of the patient, the possibility of reducing pain, and the likelihood that the procedure achieve the desired successful outcome.

One of the most challenging issues faced by bioethicists is deciding the care of patients who are cognitively impaired and are unable to express their own desires. Rabbi Weiner explains that contemporary bioethicists have two standards in such cases. The “Substituted Judgement” approach involves attempting to derive what the true will of the patient is by using advance healthcare directives, or from people close to the patient who have intimate knowledge of his preferences. Often, this involves judging, based on previous statements or actions, what he would have preferred in the present situation. The other standard is referred to as “Best Interest Standard”, which tries to decide what is in the best interest of the patient, and what a reasonable person in a similar situation would likely choose.

Poskim generally prefer the “Substituted Judgement” approach wherever possible, since a person often discusses and relies on their close relatives for advice and guidance when making decisions. Yet the relatives cannot advise acting in any way which is in opposition to halachah, despite their intimate knowledge of their ill relative. Certainly, a person who prepares an Advance Directive, which details the care decisions in case they are incapacitated, can be extremely helpful in such situations.

Following this discussion is a chapter on gaining consent from minors for potential life-saving procedures. Can a child give consent for a kidney transplant to help save the life of another person? If the child cannot give his own consent, can a parent give a “Substituted Judgement” consent in his place? If the child is the only match for a kidney transplant, can they be compelled to undergo the surgery and donation? These and other shailos are discussed, as well as the treatment of seriously ill children who are incapable of rendering their own decisions for care and pain tolerance. Finally, a brief discussion concerning care for extremely premature babies is included, which the author ends with his personal experience that such babies often show tremendous resilience, and recover against tremendous odds. “One should thus occasionally consider giving them more time and possibilities to recover than might be the norm in other situations.”

In his capacity as chaplain in a major hospital, Rabbi Weiner is often called upon to guide the patient and his family in their spiritual needs. He tells of a time when the family of a seriously ill patient requested that he say a prayer, to which he acquiesced. Moments later, the patient perished, and the father later commented, “Rabbi, your prayer did not work.” Thus, by including the noteworthy subject of prayer, the author offers us a window both into the professional life of a chaplain as well as clarifying differing opinions concerning tefillah for terminally ill patients.

Three opinions are quoted regarding this subject, to which the author offers his own proofs to buttress each position. Rav Shlomo Zalman Auerbach states that one may not pray for a miracle, based on the mishna in Brachos (9:3) which labels it a tefilas shuv, a prayer uttered in vain. Rav Shlomo Zalman says that in place of praying specifically for a cure, one should pray that “it should be good for the ill person and the family”, that the patient not suffer, and that Hashem use rachamim to do what is right in His eyes. Nevertheless, one must bear in mind that despite the bleakness of the circumstances, one should not lose hope in Hashem’s ability to bring about a cure, should He choose to do so.

The opinion of the Steipler is that one should never lose hope in the value of prayer, and provides five reasons to offer prayers even for the terminally ill. First, the prayers may help alleviate the pain and suffering, even if it does not bring about a cure. Second, the patient may live a bit longer, which also has tremendous value. Third, the gemara in Brachos (10a) tells us that ‘even if there is a sharp sword on your neck, you should not despair from [heaven’s] mercy’. Fourth, the tefillos uttered on behalf of the patient are a zchus for him. Finally, the prayers may benefit other individuals or the community as a whole. The Steipler points out that at the End of Days, we will understand how these tefillos did indeed bring about goodness and salvation.

The final opinion quoted is that of Rav Joseph B. Soloveichik, who expresses the view that the goal of prayer is not to receive a sympathetic answer from Hashem, but rather to develop a relationship between man and the Almighty. Acceptance of our prayer is our hope and dream, but the essence of tefillah is avodah she’balev, through which man unites with Hashem. The Almighty is a shomei’a tefillah, He hears our prayers and is connected, but not necessarily a mekabel tefillah.

Other chapters discuss when and how to say vidui with a dying patient, the difficult shailos involved with end of life care such as disconnecting life sustaining equipment, organ donation, burial, and a host of other vital issues which Rabbi Weiner has come across in his decade serving the public as a hospital chaplain.

The book is written as a practical guide for the medical practitioner, the patient and family, and anyone else who wishes to clarify the issues which are faced in the medical arena. Copious endnotes provide extensive sources, and allow the reader to study the matter in depth.