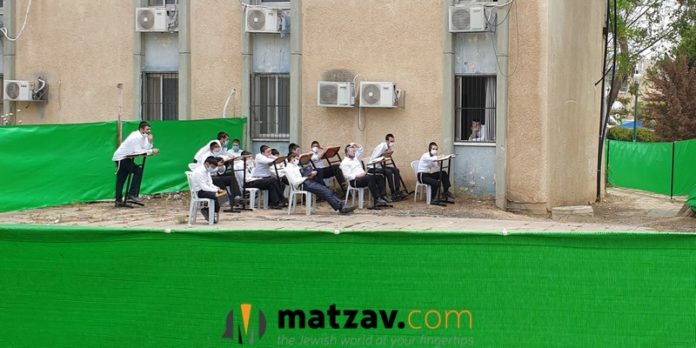 Earlier this week, Matzav.com broke the news that yeshiva bochurim and seminary girls would be able to return to study in Eretz Yisroel this coming Elul. How that development came about is lesser known, but Matzav.com spoke to those who labored behind the scenes to make it happen, resulting in a committee of about ten educational directors overseeing some 150 institutions that serve approximately 12,000 foreign yeshiva and seminary students in Eretz Yisroel.

This morning, Interior Minister Aryeh Deri and Health Minister Yuli Edelstein made the official announcement that permission would be granted to foreign students to enter Israel, despite the general ban on entry of foreigners.

The saga began when Masa, a public-service organization founded by the Prime Minister’s Office of the Government of Israel, together with The Jewish Agency for Israel, was being grated ishurei kenisah, allowances for certain visitors to enter Israel. At the time, Rabbi Nechemiah Malinowitz, a noted askan in Eretz Yisroel, approached officials in the Knesset and questioned why Masa was being granted ishurei kenisah, while students from abroad – yeshiva and seminary students – were being denied the same?

That was all Rabbi Malinowitz needed to hear. In short order, he and Rabbi Zechariah Greenwald set into motion a full-throated effort to establish an entity to represent all yeshiva and seminary students, an undertaking that received the approbation of Rav Moshe Hillel Hirsch, rosh yeshiva of the Slabodka Yeshiva of Bnei Brak.

This new entity, The Yeshiva and Seminary Coalition for Bnei Chu”l, would be open to any school or yeshiva wishing to teach Torah – Chareidi, Mizrachi, boys, girls, etc.

With remarkable siyata diShmaya, 150 institutions, from the Brisker Kollel and Mesoras Rochel to Midreshet Mirah and Yeshivat Hakotel and everyone in between, joined this new vaad, or coalition, to bring Torah to Eretz Yisroel.

These askanim now approached the government with their new unified entity – and the government officials were blown away. They couldn’t believe what had been coordinated.

Rabbi Malinowitz met with Dr. Mori Yosef, head of Hadassah, and showed him the documentation of the institutions that had joined the coalition, representing 12,000 names. Dr. Yosef said that he’s committed to helping. In short order, ishurei kenisah were being issued for these students.

Now, these institutions cannot just open without restrictions. They are no different than Israeli schools and yeshivos that must adhere to the “capsule” models, with certain restrictions and social distancing regulations being followed.

Due to the restrictions that will be in place, some yeshivos and seminaries have informed their constituents that there may be limited capacity for the coming zeman.

There will be some additional limitations or requirements:

– Students will need a special permit to be allowed on a flight. Yeshivos and seminaries will assist their students in acquiring an entry permit.

-Students will need to quarantine for two weeks upon arrival in Israel, in groups of up to six. Groups will like merge after two weeks and students will be required so stay on location for a long duration without leaving.

-The approval relates to yeshiva, seminary and ulpana students. Each institution will be required to comply with Health Ministry instructions.

–Yeshivos and seminaries are already saying that they’ll be tacking on additional tuition fees to cover the extra expenses of renting additional campuses and quarters.

-Not all institutions will qualify to participate in this incipient program

The Yeshiva and Seminary Coalition for Bnei Chu”l will be visiting every participating mosad to ensure that they are following the rules set forth by the Misrad Habriuit (Health Ministry).

“Every yeshiva and school has to be ready to follow the rules,” an askan told Matzav.com, “or they’ll be shut down – for real.”

At this time, Matzav.com can confirm that this plan relates only to single students. The status of married students who have been unable to enter Israel for various reasons has yet to be determined. Askanim continue to advocate for a solution for these families.