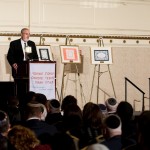 Analogizing to competition sports, rabbinic debate usually resembles nothing more exciting than tiddly-winks or croquet. Last week, however, rabbinic sport turned to mud-wrestling. The slimy stuff flew between supporters and detractors of the RCA resolution the week before that found the ordination of women beyond the pale of Orthodoxy.

Surprisingly absent from the overheated rhetoric was serious consideration of the much stronger statement by Agudah’s Moetzes Gedolei Torah issued a few days after the RCA vote results were announced. Perhaps the OO camp was unperturbed over the pronouncement of the Moetzes, the brain trust of American haredim, which read OO out of the Big Tent of Orthodoxy. Does Putin lose sleep if he is condemned for being un-American? Even without the statement, the world of OO appeared to all as occupying a position at the other end of the universe from that of Agudah. Why would they care?

They had better care. Too many parts of Orthodox life are interconnected. We have all grown accustomed to choice and variety in kosher food. That availability is bound up with numbers. Producers, eateries and supervisorial agencies are all sensitive to the size of the market; very few want to dismiss major groups of consumers. That is why so many restaurants are cholov Yisrael, and so many Pesach programs are non-gebrokt, even though many if not most of the attendees would love to have matzoh brei for breakfast. You just can’t keep the program afloat without factoring in the participants with Chassidic roots. All in all, on the market level you must consider most of the time that haredim are already more populous than non-haredim, having more children per family.

Precisely at the time that some OO rabbis are trying to band together to form their own local kashrus agencies, the Moetzes is telling everyone else that these rabbis cannot be trusted. That is going to impact on the marketability of an OO hechsher to the general community. It also means that when OO rabbis seek a role in existing agencies, they are going to be turned down. People who might not have been able to do so will point to the Moetzes statement and say that they cannot afford to lose those rabbis and lay people who respect it.

More importantly, matters of personal status will be similarly impacted. I sit on a conversion beis din – arguably, the one with the toughest standards in Southern California. We ask applicants who seem distant from our expectations why they have come to us, when there are other options that will make the process much simpler, quicker and easier. They usually respond by wistfully acknowledging that they have considered it, but they don’t want to take a chance with their future children’s acceptance by the community. They will go with the gold standard to ensure that their conversion will not be questioned in other locales, or at some future time.

OO and the IRF (the rabbinic arm of OO, which was explicitly included in the Moetzes statement) are considering or already doing their own marriages,gittin, and conversions. Anything they do will now be rejected by so many people, that even staunch advocates of OO should have to think twice: is this really fair to my kids? What will the impact of going to the IRF be on their acceptance twenty years from now? Can I afford to take the chance?

By far, however, the most important consequence of the Moetzes statement is that it places any possibility of sustained growth of OO in grave doubt.

Clearly, parts of the OO platform are attractive to many, many people. We could predict that OO will expand for a while. Then, like some models of the universe, it will begin to contract until it all disappears in a black hole. That is because, in the final analysis, continuity boils down to authenticity. Revolutions ride a crest of popularity, and then almost always fail in the next generation, if they take that long.

OO will likely grow. But what are the chances that it will be able to sell itself in the future? Modern Orthodoxy (the non-OO type) has a powerful message, despite its detractors. It holds out the possibility of living as committed Jews without significant isolation. Like every other subgroup in contemporary Orthodoxy, it is dealing with its challenges. But it holds on because it can tell itself that it is authentic, that no massive discontinuity interrupts between the past and the present. It teaches and respects the same Torah that haredim study. Conservative Judaism was attractive enough a few decades ago to become the largest of all the denominations. By now, it awaits a decent burial. It tried, but failed miserably, at convincing the next generation that it really was the heir to the Jewish past, and therefore the master of the Jewish future.

This point is crucial. The larger ModernOrthodox community that is neither OO nor haredi can demonstrate to itself that it sits on the same continuum with haredi Orthodoxy. This can be questioned by others, rightly or wrongly, but it will not dislodge the claim. Modern Orthodoxy can, should, and does make the argument to itself, however, that it shares what is crucial to belief with haredim. It does not have to accept every haredi practice and leaning to do that. If it would let go of that belief, it could not survive.

When young people study in Israel, some of them “flip;” others do not. They find an intensity of learning and practice that they cannot dismiss. They find out that the Rambam was a real Jew; that so was R Akiva Eiger, the Ketzos, the Nodah B’Yehudah. Even chodosh-assur-min-haTorah Chasam Sofer was authentic. They find a way to prove to themselves that they are part of that mesorah, or they become part of Social Orthodoxy, and their kids will likely drop out at a faster clip than their own contemporaries. You cannot treat the upper echelon of Torah scholarship as irrelevant – or be utterly repudiated by the same – and lay claim to authenticity.

OO is in a lose-lose position. If it claims to reflect the same practices, the same depth of learning as other parts of the community, it will lose, because that is demonstrably not true. If it claims that those to its right are irrelevant, it will lose, because it will cut itself off from the chain of history. It will be popular for the moment and inauthentic in the long run.

All of the above is a tragedy of epic proportions. It is certainly nothing to gloat about. Unless OO can pull itself back from the brink, we are going to lose,chas v’shalom, many people. In the short run, OO is, I believe, hugely preferable to classic Conservatism, because it is still committed to some/most forms of halachic practice, which Conservatism never was. We should pray that this continues. It is unlikely that HKBH cares about labels, even if we mortals have to. He cares about mitzvos, and we want OO to keep practicing them, even if we have to draw a bright-line to demonstrate, paraphrasing Prof. Marc Shapiro’s title, the limits of acceptable Orthodox belief.

The Moetzes certainly understood the consequences of reading OO out of Orthodoxy. They also knew that Torah survives at times through a core of those dedicated to its real values. (The Netziv observes that of all the males who left Egypt, only two made it into Israel.) Leadership requires making tough choices. Agree with its decision or not, the Moetzes exercised decisive leadership. We pray that OO leadership will arise that will begin to lead Jewish brothers and sisters back in the direction of authenticity.