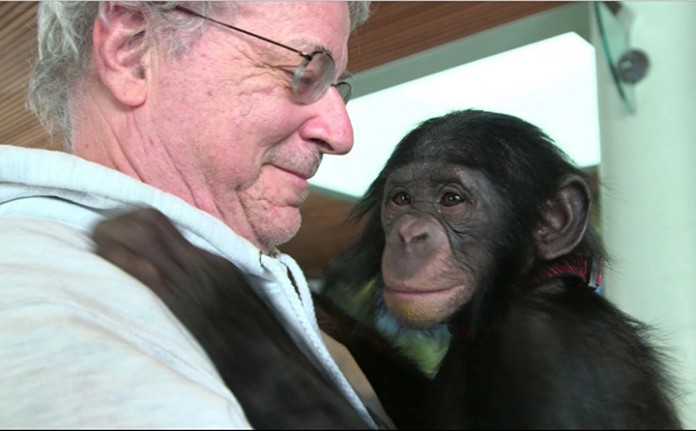 You probably know chimpanzees are very smart and very genetically similar to people, and you almost certainly view them as animals.

U.S. law views them as something more inanimate-sounding: things.

Steven Wise, a prominent animal-rights lawyer, calls chimps nonhuman animals. And he thinks they’re cognitively advanced enough that they should have the right to not be held as pets, in zoos or for research. So for years, he has been on a quest to get courts to view chimpanzees (and, eventually, other intelligent creatures, such as orcas) not as animals, not as things, but as “legal persons.”

His strategy: filing America’s first writs of habeas corpus on behalf of captive chimpanzees, challenging the legality of their detention and seeking to move them to sanctuaries. Because those have always been reserved for human prisoners, a court that granted the writ would be acknowledging the ape’s legal “personhood” — and right to be free.

Wise’s quixotic mission hasn’t yet persuaded judges. But it’s succeeded in getting media coverage and starting a conversation, at least in some corners. On Wednesday, that discussion will widen with the theater release — first in New York, and later in film festivals across the country — of a documentary chronicling the efforts of Wise and the group he founded, the Nonhuman Rights Project. The movie, “Unlocking the Cage,” was made by renowned filmmakers D.A. Pennebaker and Chris Hegedus, who are perhaps best known for their 1967 documentary about a Bob Dylan tour, “Dont Look Back.”

The movie is landing at a time when concerns about animal welfare are growing in importance to Americans, companies and politicians. It’s hardly splashy — it involves a lot of courtroom and a fair amount of Latin legalese — but it will no doubt make viewers think. I spoke to Wise recently about the film, his work and where it’s headed. The interview has been edited for length and clarity.

Q: A Variety review of the film described you as trying to “trick” judges into granting chimps the same rights as humans, which I bet isn’t the way you see things. Does the documentary portray your quest as you see it?

A: Pennebaker and Hegedus shot probably 400 hours of film, and so they probably could have made 300 different movies. And I thought for 90 minutes that they had a reasonably accurate portrayal that caught the essence of what we’re trying to do. We call ourselves a civil-rights organization focused on the rights of nonhumans. We are trying to create a social revolution; tricking has nothing to do with it. Social revolutions don’t occur by mistake or accident. They emerge when people grapple with new and fundamental differences in policy and moral principles.

Q: Some people are referring to this movie as the “Blackfish” for chimps. But the target of “Blackfish” was a corporation, SeaWorld, which is responsive to public pressure. You’ve chosen to make changes in courts, where that’s not so much the case. Can a film like this have that sort of effect?

A: That’s one of the reasons that we chose to litigate under the common law. Common law judges have a duty to keep the common law abreast of changing scientific facts, moral principles and human experiences. We’re bringing evidence of these changes to the courtroom. We filed 165 pages of affidavits from the greatest scientists in the world on chimps that explain in detail what their cognitive abilities are. We filed lengthy memoranda and petitions for habeas corpus [and] in which we discuss how the common law evolves in general and how it evolved specifically in response to the thinghood of human slaves, children and women.

What we’re trying to do is broadly change the status of nonhuman animals as things without any rights to persons who have the capacity to have rights.

We’ve mentioned a Gallup poll from last year that showed that 30 percent of Americans thought that animals should have rights, and I think judges are interested in that. But they’re also interested in other ways of showing changes of attitudes, such as other kinds of court cases and legislation that show a deepening interest in nonhuman animals. They are interested in what their children have to say about it and their spouses, and what newspapers report and television shows. They can feel that it’s time for the common law to change.

Q: In the film, you’re shown practicing for hearings, and one challenge brought up is this: Why isn’t this just a welfare issue? Wouldn’t strengthening welfare laws benefit many animals, and not just your chimp plaintiffs?

So long as you’re a thing, you are at the entire mercy of persons. For example, even if nonhuman animals are the subject of anti-cruelty statutes, the animal herself has no recourse and can’t even get an injunction to stop it. Even if the human wrong-doer is prosecuted, the case is between the state vs. the person for being cruel to the animal, and all the remedies run to the state and not to the nonhuman animal victim.

A: We went to our experts, including Jane Goodall, and we asked whether chimpanzees can assume duties and responsibilities? And they unanimously said yes. So we filed 65 more pages of affidavits in which the experts provided numerous examples of this. Within chimpanzee communities, mothers have duties to children, males have patrol duties and duties to protect the young and the females. Two or three scientists have worked with communities that were partly chimpanzee and partly human. And they relate how those chimpanzees have to strip their beds and bring their bedding to be washed. And when they sit down to eat, they have to eat their first course of soup, and if they don’t, then none of them go onto the next course.

Q: You’re gearing up to launch a new habeas corpus case on behalf of an elephant. Why an elephant, and why now, when the chimp cases remain unsettled?

A: As with chimps, we will argue that elephants are autonomous beings who should not be enslaved or kept in cages. We’re almost ready. But elephant experts are always out in the bush, and they don’t have Internet and a computer. We’re in our third year working with many elephant experts to get us the affidavits we need to proceed. They are really the limiting factor — slowly, slowly they are coming in. We hope that we can file a lawsuit this fall.

We spent seven years putting all the states and 20 English-speaking countries in a hierarchy. We’re beginning to litigate in the states that we think are the most friendly or least hostile for us.

We concluded that New York was the best state to begin litigating the personhood of nonhuman animals. Soon we intend to litigate on behalf of elephants in a different state. That state had no chimpanzees, so we went on to our next animal plaintiff, which would be an elephant. Once there are sanctuaries for orcas – which there aren’t right now – we’re looking at filing a habeas corpus on their behalf, too. We’re looking at any nonhuman animal for whom we think we have sufficiently powerful data that shows they are autonomous beings.

Q: What’s an autonomous being? My cat decides when he wants to eat. Is he autonomous?

A: An autonomous being can freely choose how to live her life to constantly make choices, the way that we do. The New York courts, and other courts, make clear that autonomy is a supreme common law value.

I don’t know [about a cat]. There’s my personal opinion, but no judge cares about that. The issue is, what facts can we prove in court, if we’re claiming that autonomy is a sufficient condition for personhood? And, by the way, we don’t argue that autonomy is necessary for personhood, just that it’s sufficient, at least to the extent of a writ of habeas corpus.

That’s one of the reasons that we didn’t choose a cat, we chose a chimpanzee. There are hundreds and hundreds of articles that show that chimpanzees have what it takes to be autonomous.

Dogs are in our sight. They weren’t in our sight when I began. But more and more articles on dog cognition are coming out. We would need to understand what the remedy would be [if dogs were declared legal persons]. What are a dog’s fundamental interests? Certainly life, so we wouldn’t be able to kill them anymore. We might not be able to breed them anymore, either. Especially if they had a right to bodily integrity.

Q: What’s the end result look like in your vision? No animals in captivity at all? No pets?

A: One of the arguments against us is the slippery slope. Somehow, critics say, if you can’t keep a chimpanzee in a cage it means that everybody has to be a vegan. Those two are far apart.

That’s one of the good things that [New York State Supreme Court Justice Barbara Jaffe] said in her Hercules and Leo opinion [which denied a writ Wise filed on behalf of two research chimps at a New York university lab]. In response to the attorney general making the slippery slope argument, she said, “I don’t care about the slippery slope; if the litigant in front of me is entitled to relief, then she’ll get it, and where that may lead is up to another judge.”