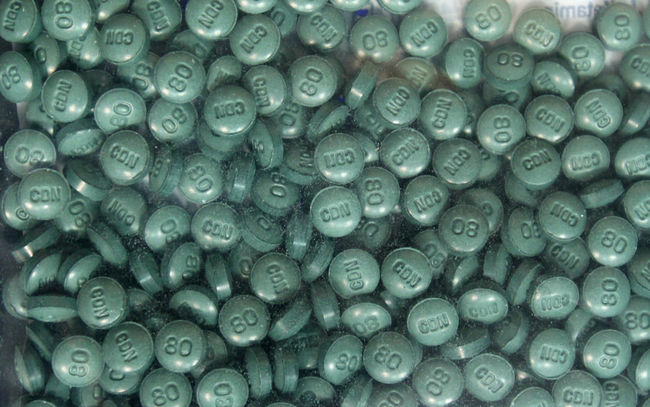 It was first developed in a Canadian lab more than three decades ago, promising and potent — and intended to relieve pain in a less addictive way.

Labeled W-18, the synthetic opioid was the most powerful in a series of about 30 compounds concocted at the University of Alberta and patented in the U.S. and Canada in 1984.

But no pharmaceutical company would pick it up, so on a shelf the recipe sat, the research chronicled in medical journals but never put to use. The compound was largely forgotten.

Then a Chinese chemist found it, and in labs halfway around the world started developing the drug for consumers in search of a cheap and legal high — one experts say is 100 times more potent than fentanyl and 10,000 stronger than morphine.

And now it has come to North America. The substance first surfaced in Canada last fall, when Calgary police seized pills containing traces of the drug, according to the Calgary Herald. Then more than 2.5 pounds of W-18 was discovered in the home of a Florida man, who was sentenced to 10 years in federal prison after he plead guilty to smuggling fentanyl from China, reported the Sun Sentinel. He faced no charges for possessing the W-18, however, because it’s not yet illegal in the U.S.

And just last week, Health Canada’s Drug Analysis Service confirmed that four kilograms of a chemical powder seized in a fentanyl investigation in December 2015 was indeed the dangerous W-18 drug.

Health officials are concerned for many reasons. There are currently no tests to detect the drug in a person’s blood or urine, according to reports, making it difficult for doctors to help someone who might be overdosing, a risk outlined in the drug’s 1984 patent.

Its effect on humans is largely unknown because W-18 was only ever tested on lab mice.

“Whenever this drug starts circulating on the streets you’re going to have deaths,” Sacramento-based forensic chemist Brian Escamilla told the Calgary Sun.

Health Canada is working to have W-18 added to its Controlled Drugs and Substances Act.

The Drug Enforcement Administration has not made a formal statement warning of the hazards of W-18, but a spokesman for the department did tell the Calgary Sun that its unclear how far the drug has infiltrated the U.S. and alluded to reports suggesting W-18 is being cut with heroin and cocaine in Philadelphia.

If that’s true, the new drug could exacerbate the growing heroin epidemic.

The debut of W-18 also draws attention to the growing influence Chinese chemists have on the kinds of drugs entering the U.S. Last fall, China banned 116 different synthetic drugs, according to reports, including fentanyl and the deadly flakka, a drug that put south Florida in crisis mode. Since then, flakka has all but disappeared.

In its absence, however, Chinese drug manufacturers began producing alternatives to sell, including W-18, a DEA spokesman told the Calgary Sun.