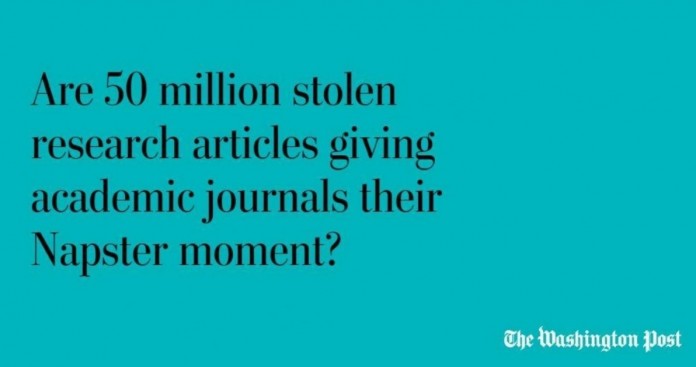 Alexandra Elbakyan is a highbrow pirate in hiding.

Elbakyan has kept herself beyond the reach of a federal judge who late last year issued an injunction against her site, noting that damages could total $150,000 per article – a sum that Applied and Computational Harmonic Analysis, a journal in her database, could help calculate. But she is not hiding from responsibility.

“There are many ways to argue that copyright infringement is not theft, but even if it is, it is justified in this case,” she said in an instant-message interview via Google. “All content should be copied without restriction. But for education and research, copyright laws are especially damaging.”

Elbakyan is pursuing a master’s degree in the history of science while pursuing the worldwide liberation of knowledge from, as she sees it, the tyranny of for-profit publishers. Her ideology was shaped growing up in a former Soviet republic where access to information and the Internet was difficult.

She has even been compared to Robin Hood, although she said, “Sometimes I think it is not a good comparison, since what he was doing was illegal. And sharing books and research articles should not be illegal.”

Many academics, university librarians and longtime advocates for open scholarly research are closely following Elbakyan’s efforts. They believe she is finally giving academic publishers their Napster moment, a reference to the illegal music-sharing service that disrupted and permanently altered the industry.

“While we don’t condone fraud and using illegal sources, I will say that I appreciate how she is shining a light on just how out of whack the system is of providing easy access to basic information that our universities and scholars need to advance science and research,” said Heather Joseph, executive director of SPARC, an organization that advocates for open access to research. “This has been a problem for decades.”

But to publishers, the only example Elbakyan is setting is that of a thief.

“This is outright piracy,” said Lui Simpson, executive director of international enforcement and trade policy for the Association of American Publishers. “Nobody is justified in doing this.”

Like other content businesses, the journal industry has largely moved online. But unlike newspaper, magazine, or other information industries, academic publishers have avoided giving their content away free. Scholarly publishing, the Financial Times has said, is “the business the Internet could not kill.”

In many ways, academia has itself to blame for its dilemma. Higher education is a publish-or-perish world in which administrators judge professors based on their scholarly output, basically outsourcing the validation of a scholar’s worth. That gives journals enormous intrinsic value, if not to society then to academics themselves. Brands such as the Academy of Management Annals and the Annual Review of Condensed Matter Physics matter.

Scholars and librarians say the publishers then use this to take advantage of them.

Researchers sign over the copyright and provide their work, often taxpayer funded, free to publishers who then get other researchers to review the papers – also free. The publishers then sell journal subscriptions – some titles cost more than $5,000 a year – back to universities and the federal government. And if someone wants an article, that costs about $35, so that person is paying for the research and to read the results.

“That means that I, as a taxpayer, (am) paying for the research and paying again for the benefit of reading it,” a man who identified himself John Dowd wrote to the White House Office of Science and Technology Policy as part of a forum on public access. “This seems patently unfair.”

Critics also say that publishers raise prices faster than inflation – each side argues pricing changes in differing and confusing ways – and further increase their revenue by continually adding new journals for universities to subscribe to individually or in packages. There are now 28,100 journals publishing 2.5 million articles a year. Expenses for journals and other subscriptions have risen 456 percent since 1986, according to the Association of Research Libraries.

For researchers whose libraries have cut back on journal spending or for those working in Kazakhstan and other developing countries, spending $35 per paper or using interlibrary loans is, they complain, too onerous and slows down their research. Some trade articles on Twitter and Reddit.

Pirating was a skill Elbakyan learned growing up in Almaty, the largest city in Kazakhstan, where Internet access was extremely limited and content – books, music, movies – was expensive. That experience shaped this belief: “All content,” she declares, “should be copied without restriction.”

Elbakyan has studied neuroscience and consciousness in labs at Georgia Tech and Albert-Ludwigs University in Freiburg, Germany. At first, she pirated papers for herself and other researchers. She noticed so many requests that she decided to automate the process, setting up Sci-Hub four years ago.

Sci-Hub connects to a database of stolen papers. If a user requests a paper in that database, Sci-Hub serves it up. If the paper is not there, Sci-Hub uses library passwords it has collected to find a paper, provides it to the searcher, then dumps the paper in the database. The site can be clunky to use, often sending users to Web pages in foreign languages.

Elbakyan and her supporters have said the passwords were donated by those sympathetic to her cause. But she also acknowledges that some passwords were obtained using the kind of phishing methods that hackers use to dupe people out of financial information.

“It may be well possible that phished passwords ended up being used at Sci-Hub,” she said. “I did not send any phishing emails to anyone myself. The exact source of the passwords was never personally important to me.”

The industry watched closely as Sci-Hub use grew, with more than 150,000 stolen papers downloaded per day, according to Elbakyan. Although publishers say those downloads represent a small fraction of all papers legally obtained, the industry decided to fight back last year.

Elsevier, the world’s largest journal publisher, sued Elbakyan in New York federal court, alleging copyright infringement and computer fraud. The company alleges that she and others operate “an international network of piracy and copyright infringement by circumventing legal and authorized means of access.”Elbakyan was offered help to retain an attorney, but she never got one, instead writing a letter to the court explaining her actions.

“Elsevier,” she wrote, “operates by racket: if you do not send money, you will not read any papers. On my website, any person can read as many papers as they want for free, and sending donations is their free will. Why Elsevier cannot work like this, I wonder?”

Publishers acknowledge they can probably never catch up to Elbakyan, yet they are adamant that Sci-Hub will not harm them or evolve into a future business model the way that Napster ultimately led to Apple’s iTunes – and dramatic revenue losses for record labels.

But the risk for publishers is that if library funding struggles continue, forcing deep cutbacks on subscriptions, professors will turn to Sci-Hub more, causing a slow erosion of the industry. A recent survey by University of Southern California and California State University librarians of more than 250 academics found that 41 percent “don’t care” about copyright. Thirty percent think “information should be free.”

Publishers and experts on academic publishing acknowledge that the industry has a tougher story to sell these days.

“People often say to me, ‘You don’t pay the authors. You don’t pay the reviewers. You hardly print anymore. The Web is free. Why do you charge?'” said H. Frederick Dylla, the former director of the American Institute of Physics and board member of the Association of American Publishers. “It sounds like a compelling argument. But it actually isn’t.”

Albert Greco, a publishing expert at Fordham University who is working on a book about scholarly publishing, said those making that argument are forgetting everything they learned or should have learned in economics class.

“There are costs,” he said. “Does The Washington Post have a paywall?”

“So is it fair then if some high-school student wants to really follow the Supreme Court and doesn’t have the money to pay?” Greco said. “Life is a bitter mystery. We can’t give everything away for free. It’s not that kind of country.”

Even with the shift away from print, publishers say they still provide valuable services. Kent Anderson, an academic publishing consultant, has posted a list of “96 things publishers do” on the blog Scholarly Kitchen – from training and managing peer reviewers to preventing plagiarism to building interactive components into digital versions.

Anderson said in an interview that the controversy over academic publishing has become “an emotional and social crusade” that bends the facts. Sure, there are more journals and articles being published, but he said the increases are in line with the growth in federal research funding. The real problem: Library budgets haven’t kept up.

“Ultimately,” he wrote in a post on Scholarly Kitchen, “the root cause of larger information expenditures is a growth in research funding, researcher numbers, and research-driven careers.”

They say that publishers are too opportunistic in generating ideas for revenue. They also point to data showing that journals from nonprofit publishers are cheaper than for-profit journals, sometimes by more than 50 percent.

Whether Elbakyan’s actions and the resulting controversy fuel a massive disruption to the industry, it is clear, critics say, that for-profit academic publishing is facing regulatory and competitive head winds.

The White House Office of Science and Technology Policy is mandating that agencies funding more than $100 million in research require the final, peer-reviewed version of the manuscript – if not the published paper – to be freely available within 12 months of publication.

A movement for open-access journals is building momentum, with about 7,300 now in circulation.

Open-access journals, which include the popular PLOS One, typically charge researchers more than $1,000 for publication but make the papers instantly available free online. Universities also are setting up repositories for their faculty to post papers, although only in manuscript form. Cold Spring Harbor Laboratory hosts a website for scientists to post their papers – without peer review – before submitting them to journals.

Industry representatives say they welcome competition from open-access journals, but they also say those publications lack the intellectual rigor and clout that professors need to advance their careers.

Instead, they are adding open-access options to their journals – sometimes with fees double that of what the start-ups charge, frustrating researchers. Elsevier says it is the fourth-largest open-access publisher, publishing 20,000 open-access articles last year.

How this all ends, nobody really knows.

In the meantime, Elbakyan is adding to her collection of stolen papers every day.

“The exact location is secret,” she said.

Can she ever be stopped?

“It depends on my expertise,” she said. “Can I outsmart these guys?”

Or has she already?