Lakewood, NJ – It was one of the largest simchos of its kind in the United States in recent memory, as the rosh yeshiva of the largest yeshiva on the continent celebrated the marriage of his daughter.

Last night, thousands upon thousands of people converged on Lake Terrace Hall off of Oak Street in Lakewood, NJ, to participate in the wedding of Rochella Kotler, daughter of Rav Malkiel Kotler, rosh yeshiva of Beth Medrash Govoha, the well-known bastion of Torah around which the Torah city of Lakewood has been built.

The chosson, Yehuda Klein of Boro Park, is a son of Rav Shimshon Klein.

In attendance at the wedding were many roshei yeshiva, admorim and rabbonim, as well as relatives, friends, talmidim of Beth Medrash Govoha, baalei batim and other bnei Torah, who joined in participating in the simcha of the rosh yeshiva.

“Looking around, I saw the heads of virtually every yeshiva in the tri-state, and askonim who are well known for their generosity and devotion to the tzibbur,” one guest remarked. “It was an honor just to be present, being mishtateif in the chasunah of the rosh yeshiva.” 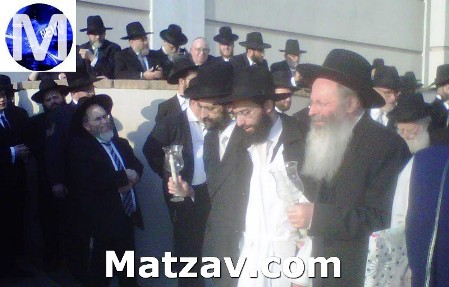 Among those in attendance were the kallah‘s grandparents, Rebbetzin Rishel Kotler, wife of Rav Shneur Kotler zt”l, rosh yeshiva of Beth Medrash Govoha, and Rav and Rebbetzin Zev Tikotzky.

The mesader kiddushin was the Novominsker Rebbe, who leads the yeshiva where the chosson studied, Yeshivas Novominsk in Boro Park.

Observers conjectured that it may have been the largest non-Chassidic wedding of its kind since the Torah world was reestablished on these shores following the Holocaust, largely due to the efforts of Rav Kotler’s legendary grandfather, Rav Aharon Kotler zt”l.

In part to deal with the thousands expected at the simcha, the chupah was scheduled earlier than usual, with a starting time of 5:45 p.m. The chupah was held outside the hall, with thousands looking on.

Guests arrived from around the country and beyond to share in the simcha, expressing their joy and celebrating with the rosh yeshiva and his family at this special time.

Music at the event was provided by the Shloime Friedman Orchestra, while the catering was handled expertly by Itche Meir Greenwald of Greenwald Caterers. A devoted team of Beth Medrash Govoha staff members orchestrated the wedding and the many logistics in light of the unprecedented crowds.

Local police officers were on hand to direct traffic as cars streamed in out of the vicinity, with neighboring parking lots being utilized for the arriving motorists. Police were hesitant to place an exact figure on the number of attendees at the wedding, but officers were unanimous in stating that it was the largest wedding they can recall ever taking place in Lakewood.

May the chosson and kallah merit to see the fulfillment of the many brachos showered upon them during their chasunah, and may their bayis ne’eman be a source of great nachas to the greater tzibbur.