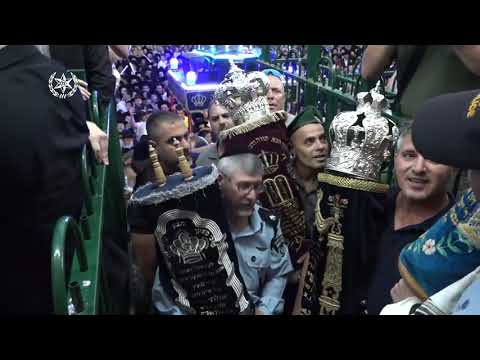 Thousands participated Wednesday evening in the emotional procession marking the return of the four sifrei Torah that were stolen last week from the Tiferes Shimon shul (Orchos Torah alumni) on Rechov Rabi Akiva in Bnei Brak.

The procession left from the house of the late Rosh Yeshivah, Hagaon Harav Aharon Leib Shteinman, zt”l, who was the Rosh Yeshivah of Yeshivas Orchos Torah.

Many Rabbanim and Roshei Yeshivah also participated in the hachnasas sifrei Torah.

Border Police located the four sifrei Torah in a PA town in the Shomron Sunday, and they were later identified as the ones stolen from the shul on Bnei Brak’s Rabi Akiva Street last Monday night. The sifrei Torah were in good condition and showed no signs of desecration.

After extensive searches, police found the sifrei Torah in a sheep pen in Kafr Akraba in the Shomron. During the search they confiscated a hunting rifle, ammunition and explosives. A gag order has been placed on all other details of the case.

The perpetrators broke into the safe that contained the scrolls, stealing four sifrei Torah and leaving another sefer Torah as well as scrolls of the Nevi’im lying in disgrace on the floor.