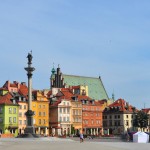 Thousands of Poles took part in an anti-racism protest in Warsaw on Sunday, and many held signs saying “Hug a Jew,” in both Polish and English, Israeli news site NRG reported on Tuesday.

Speaking from Warsaw’s infamous Umschlagplatz, Amnesty International organizer Agata Kwiatoń told reporters, “Seventy-seven years ago hundreds of thousands of Jews were deported to the death camp of Treblinka from this very spot.”

“They were murdered because of their religion and origin. Others were threatened with exile,” she said, according to Radio Poland.

The anti-racism protest mostly focused on criticism of what demonstrators perceive as growing Polish nationalism and hostility toward Syrian migrants and other foreigners. Some right-wing politicians have criticized Poland’s plan to accept 7,000 Syrian refugees over the next two years.

Polish President Andrzej Duda recently faced criticism for scheduling the swearing-in of the new Polish parliament the same day this month as an EU summit on migration, raising doubts as to whether Poland would even be represented.