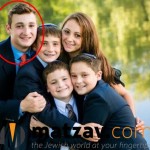 Barack Obama and his administration do not care about Jews.

It doesn’t matter whether the Jews are European or Israeli or American. Jews can be conveniently excised from the category “Westerner,” Obama has found – and he’s been eagerly putting that newfound knowledge to use.

The latest victim of the Obama administration’s egregious Jew-hatred is 18-year-old American citizen Ezra Schwartz. Schwartz, from Sharon, Massachusetts, was visiting Israel; while there, he was delivering care packages to Israeli troops when his car (pictured) got caught in a traffic jam. That’s when a Palestinian terrorist opened fire with an automatic weapon before ramming another car with his own. Schwartz was killed.

The Obama State Department has yet to issue a statement specifically on Schwartz’s death. Instead, they issued their general statement essentially condemning both sides. “We condemn these terrorist attacks against innocent civilians in the strongest possible terms,” said State Department spokesman Edgar Vasquez. “As we’ve made clear, we remain deeply concerned about the situation, and continue to urge all sides to take affirmative steps to restore calm and prevent actions that would further escalate tensions.”

The Obama administration’s unwillingness to mention Schwartz’s citizenship follows hard on the heels of the Obama administration’s complete silence on the terrorist murder of dual Israeli-American citizen Richard Lakin, a peace activist from Newton, Massachusetts. He was shot in the head, stabbed in the face, and then stabbed in the head by two Muslims aboard a bus. He died in late October.

On October 6, the State Department confirmed that Palestinian Hamas terrorists murdered American citizen Eitam Henkin, along with his wife, in front of their children. This merited no special attention from the Obama administration.

Then, of course, there was the terrorist attack on Jerusalem synagogue Torah Kehilat Yaakov on November 2014, in which three American citizens were murdered while praying. No biggie, however – aside from confirming the citizenships of the victims, the State Department had nothing really to say.

All of this fits a pattern. When Jews are killed in Israel, they have it coming, since Israel is part of a “cycle of violence” according to the Obama administration. The story is slightly different in Europe, where Jews are accorded “random” status according to the Obama administration. When the Charlie Hebdo offices were attacked by Muslim terrorists last year, the Obama administration rightly took umbrage at the targeting of Westerners over their exercise of free speech. When those same terrorists attacked a Jewish deli just hours later, Obama labeled the attacks “random.” When Muslim terrorists murdered 129 people in Paris last Friday, Obama called it an attack on humanity’s core values. When Muslims stabbed a Jewish teacher in Marseilles days later, that merited no comment. After all, why should the Obama administration comment on the vast wave of anti-Jewish Muslim crime in Europe? It certainly doesn’t spring from religious discrimination. Only Christians and Jews are capable of religious discrimination.

In the real world, Jews are always the tip of the spear when it comes to barbarians attacking the West. But when you don’t consider the West worth defending, it’s no surprise you’re generally blithe about the murder of Jews, American or not.