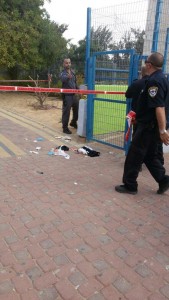 Three Arabs were wounded this morning in a stabbing in Dimona by an Israeli suspect, who was caught and arrested.

The motive of the attack is unknown. The stabber was taken down outside a Dimona school.

The three Arabs are in moderate condition.

Police forces have cordoned off the area.

All three victims, said to be Palestinians, were taken to Soroka Medical Center in Beer Sheva.