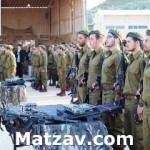 Three chareidi men were arrested on Wednesday on the suspicion that they conducted a campaign to convince other chareidi men to not enlist in the IDF, Raphael Poch reports for Arutz Sheva. The suspects reside in Bnei Brak and Beitar Illit respectively.

According to the accusation, the three suspects publicized the identities and personal information of chareidim who were planning to enlist, calling them derogatory names and infringing upon their privacy.

It is also believed that the three suspects campaigned against the organizations that were responsible for helping the chareidi men enlist. The suspects published the information and statements via street placards and email lists.