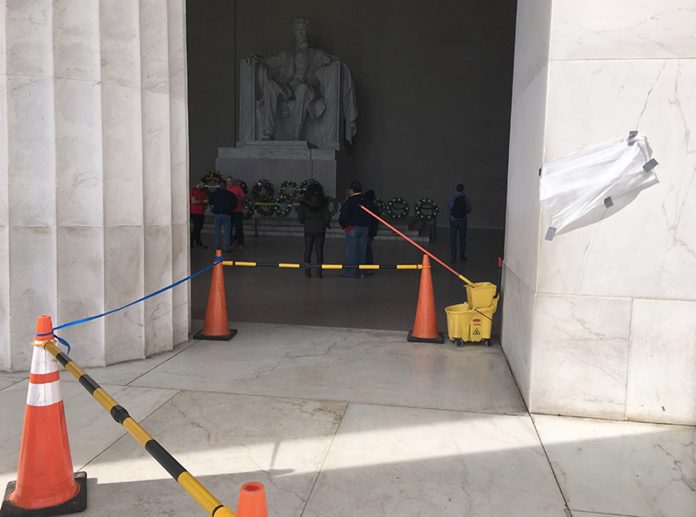 The Washington Monument and the World War II and Lincoln memorials were damaged by graffiti over the holiday weekend, officials said.

U.S. Park Police and National Park Service officials said the three sites had graffiti markings that were similar in nature and not considered to be political or racial.

Some of the words in the messages were hard to decipher. One message said, “Jackie shot JFK.” Another mentioned the Sept. 11, 2001, terrorist attacks on the World Trade Center. And another part of the graffiti said, “blood test is a lie” and mentioned leukemia, cancer and HIV, saying “get second opinion.”

The messages were written in black, permanent marker in five spots at the monuments. Two of the vandalism messages were at the Lincoln Memorial, including one in the memorial and another at the foot of the steps. One was found at the World War II Memorial and another at the Washington Monument. And a fifth one was on an electrical box near 15th Street NW and Jefferson Drive SW near the grounds of the Washington Monument.

Sgt. Anna Rose, a spokeswoman for the U.S. Park Police, said each of the monuments had similar messages. The size of the message varied from about the size of the palm of a hand to as big as a football, officials said.

The incidents likely happened between 9 and 11 p.m. Saturday night, according to officials. At least one person is believed to be responsible for the graffiti and faces vandalism charges.

Authorities said they have been told there was a large crowd around some of the monuments Saturday night and they asked anyone who saw anything to come forward with information.

They are also working to pull surveillance video from the area and believe that all of the incidents are related. Park Police officials said none of the messages rose to the level of being a hate crime, according to Rose.

In 2013, a case was dismissed against a Chinese woman who was accused of tossing green paint on several D.C. landmarks, including the Lincoln Memorial. Jiamei Tian had been charged with defacing property at Washington National Cathedral and other sites.

She was ordered to go to St. Elizabeths Hospital, the city’s psychiatric facility.

It often takes several treatments to remove graffiti from the monuments and authorities have to be careful not to cause any long-term damage, according to Mike Litterst, a spokesman with the National Park Service.

Litterst said getting the green paint off the monuments in the earlier incident took about a dozen treatments, but he said “hopefully this won’t be quite as bad.”