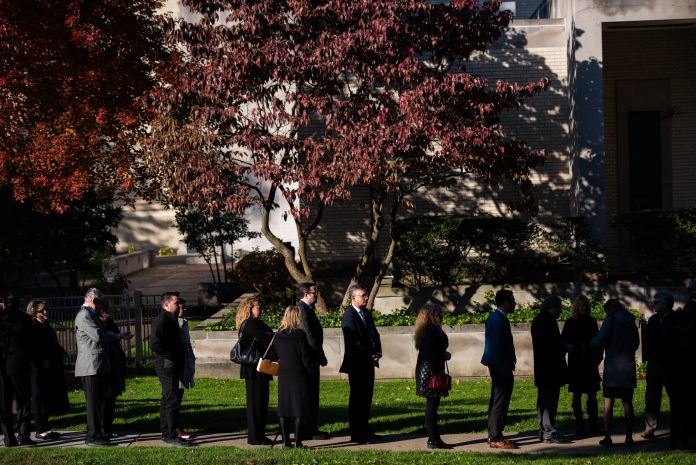 Pittsburgh prepared to hold three more funerals on Wednesday for Jewish victims of a shooting rampage at a synagogue that has become the focus of a fierce political debate about white nationalism and antisemitism ahead of hotly contested US congressional elections next week.

Eleven worshipers were gunned down on Saturday morning by a man who stormed into the Tree of Life Synagogue and opened fire, yelling antisemitic statements including: “All Jews must die.” It was deadliest attack on Jews in the United States.

Funerals were due to be held on Wednesday for Melvin Wax, 88, the man who was leading Sabbath services when the attack began, retired real estate agent Irving Younger, 69, and retired university researcher Joyce Fienberg, 75.

Wax, a retired accountant who had just become a grandfather, was leading Sabbath services when he was shot and killed, the Pittsburgh Post-Gazette reported.

“He was a gentle man. Easygoing, simple, quiet,” his friend Bill Cartiff told the newspaper.

Fienberg spent 25 years as a researcher at the University of Pittsburgh’s Learning Research and Development Center until she retired in 2008.

“She was an engaging, elegant, and warm person,” the center said on Facebook.

Younger, whose funeral will also be held at Rodef Shalom, was remembered as a doting grandfather.