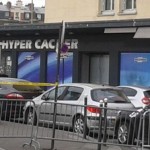 Vivienne Walt, aTIME magazine writer, has written how difficult it is to explain the Paris terror attacks to her child.

In January it had been relatively simple to explain to my child, who was then eight, why the cartoonists had been the target, and why a Jewish supermarket was attacked—grim as the details were. ….Answering questions over dinner on Sunday was more difficult, however. The targets this time were young people having fun on a warm Friday night; people, in fact, who were his age not all that long ago.

I wonder how Ms. Walt explained the January attacks in a way that her son would understand. Are Jews considered natural targets in the Walt household? Or is it because of their presumed association with that little country that happens to be the Jewish state? I would love to know what makes shooting Jewish shoppers relatively explainable to Vivienne Walt.

Yoav Hattab, murdered in the HyperCacher kosher supermarket attack in January, was 21, and Yohan Cohen was 22. They were pretty young. In fact, they were younger than nearly every victim of the more recent Paris attacks. But apparently that didn’t make it more difficult to explain their murders to Vivienne’s 8 year old son. Shopping for food is probably as familiar an experience to her son as sitting in a cafe or going to a concert, but clearly that didn’t make the job of explaining those murders any more difficult.

Somehow, their being Jewish made it all understandable.

So what exactly did she say so that her son would be secure in the knowledge that only attacking Jews (and cartoonists) is not something he needs to empathize with or worry about?

Grappling to find the logic in this, my son pondered the situation, and asked, “Well, why did they attack those restaurants and not other restaurants?”

It was a good question, hitting at the most terrifying aspect of all—the randomness of the attacks. Friday’s attacks impacted so many regular Parisians because they had been aimed directly at the most normal of people — the drinkers, the concert-goers, the soccer fans.

Implying, again, that the Jews going shopping are not exactly “the most normal of people,” and in a small way their murders are more logical than those of the drinkers and soccer fans.

Does Vivienne Walt harbor antisemitic feelings? If so, it is certainly deep in her subconscious. After all, she wrote an article for TIME in the wake of the HyperCacher attacks about how it affected the Jewish community. But here it is. Murdering “normal” French people is something that even adults have a hard time grappling with, but murdering French Jews is something that can be explained even to a pre-teen,

And the editors at TIME did not even think for a second that there was anything wrong with this piece.

ELDER OF ZIYON – THE ALGEMEINER