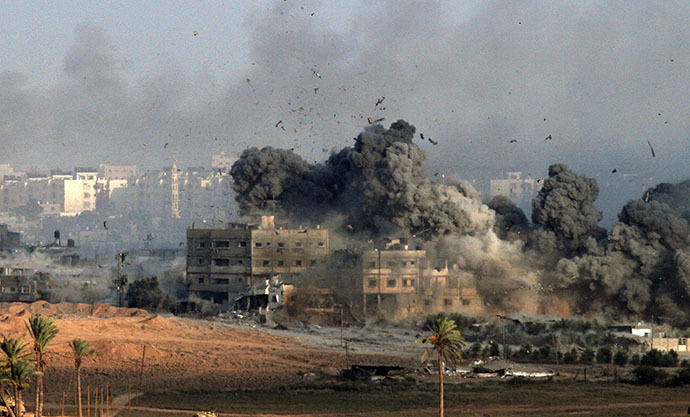 Earlier this month, Senator Bernie Sanders caused a stir by condemning Israel’s counter-attacks against Hamas terrorist in Gaza as “disproportionate.” After admitting that he had wildly exaggerated the number of civilian deaths in the 2014 Gaza war, he doubled down on the charge condemning the Israel Defense Forces. But while he took a much-deserved beating over this from the pro-Israel community, including many Democrats, Sanders could say in his defense that he was merely echoing the same sorts of unfair criticisms of Israel made by the Obama White House and State Department in 2014. But even as many of the leaders of the Democratic Party attacked Israel over its behavior in Gaza, the U.S. military was seeking to emulate them.

Evidence of that was made clear this week when it was revealed that U.S. fighting ISIS terrorists in Mosul were attempting to use the very same tactics employed by the IDF.

U.S. Air Force General Peter Gersten said in a news conference held via video link from Baghdad that the Americans seeking to take out terrorists embedded in civilian areas were now using the “knock on the roof” technique created by the Israelis. During the fighting, the Israelis sought to warn civilians in a building that was being used by Hamas killers by shooting a non-explosive device onto the roof allowing non-combatants as well as any terrorists present to escape.

The tactic saved many lives though sometimes that goal was frustrated by the fact that Hamas discouraged civilians from availing themselves as the chance to get out of harm’s way. Their interests were served by maximizing the number of civilian casualties. That’s the reason why they placed their fighters as well as the missile launchers responsible for shooting thousands of rockets at Israeli cities alongside apartment buildings and storing their munitions in schools, including those run by the United Nations. Israel did everything in its power to avoid hurting non-combatants even as its military was forced to silence the rockets and root out the tunnels used to carry out cross-border kidnapping and murder raids. But the fact that an administration and a senator that both pose as “friends” to Israel would repeat the canard that Israel is targeting civilians shows that Hamas’s misinformation efforts were successful in the United States as well as in countries where the Jewish state’s foes predominate.

But the U.S. military never bought into these lies. In November of 2014, General Martin Dempsey, then the Chairman of the Joint Chiefs of Staff, publicly praised Israel for its conduct in Gaza. He correctly said that that Israel went to “extraordinary lengths to limit collateral damage and civilians casualties” in Gaza. More than that, he said the U.S. military would be seeking to use Israel’s conduct in the fighting as a model. This week’s announcement of the use of the “knock on the roof” technique is proof that this was not an empty promise.

Of course, when one is fighting terrorists who deliberately choose to place themselves in and around civilians, no technique is foolproof. As General Gersten admitted, a women and child were killed when the Americans tried the “knock on the roof” tactic in Mosul because, unfortunately, they rushed back into the building when the lethal shell hit.

But the point is that when faced with the awful task of fighting bloodthirsty terrorists who deliberately target civilians — as both Hamas and ISIS do — even the most humane armies are faced with a dilemma. They must try, as both Israel and the U.S. do, to avoid unnecessary killing, especially of those not involved in the fighting. But they cannot grant the terrorists impunity. The rules of engagement used by Israel are highly restrictive as are those of the U.S. armed forces. But if terrorists are in built-up areas, they must still be tracked down and killed lest they be allowed to slaughter even more innocents.

This is a lesson that the Obama administration and even a critic of Israel like Sanders should have already learned. Rather than carrying out war crimes, as Sanders seemed to imply, the Israelis have been role models for Americans tasked with the same thankless job of hunting killers. As the U.S. military’s actions demonstrate, the IDF deserves the praise of American leaders, not the ill-informed and spiteful slurs that have emanated from both the White House and the Sanders campaign.