Rav Yitzchak Kolitz (1922-2003). Born in Elita, Lithuania, to Rav Eliyahu Dovid Nachman Kolitz, Rav of the town and a chavrusa of the Chazon Ish for many years. His father passed away when he was 3 years old. After spening several years in the public school, Rav Yitzchak went to Slobodka when he was 10 years old. In 1935, he moved to Eretz Yisrael with his mother and older brother. At the age of 14, he met Rav Isser Zalman Meltzer, with whom he developed a close relationship for life. He learned at Chevron and became close to Rav Yechezkel Sarna. After the 1948 war, he became a magid shiur in a yeshiva in Rechovot; during that time, he became a ben bayis of the Chzon Ish. In 1955, he was appointed a dayan in Tel Aviv, then Av Beis Din, then Chief Rabbi (following Rav Bezalel Zolti).

Rav Yaakov Yosef (1840-1902). Born in Krozhe, a province of Kovno, he studied in the Volozhin yeshiva under the Netziv, where he was known as “Rav Yaakov Charif” because of his sharp mind. He was one of the foremost students of Rav Yisrael Salanter. In 1888, he accepted an invitation and became the first and only Chief Rabbi of New York, as elected by the Association of American Orthodox Hebrew Congregations. He also took an active role in establishing the Etz Chaim Yeshiva, founded in 1866. He authored Le’Beis Yaakov.

· Crusaders under Godfrey de Bouillon massacred (by gathering them in a shul and setting it on fire) and sold as slaves 20,000 to 30,000 Jews of Yerushalayim and barred them from the city for 88 years, 1099
· The Inquisition was established by Pope Clement IV, 1267. Last victim of the Inquisition was executed in Valencia, Spain, 1826 – 559 years later, to the day
· Death of Behrend Lehmann, German philanthropist, court financier and supporter of Torah, 1730
· Military tribunal opened proceedings against several dozen Jews, including the Duyanevetzer Rav and the Rizhiner Rebbe, who were alleged to know about the murder of two Jewish informers, 1837. 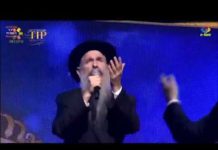 Watch: Mordechai Ben David Singing a Medley of Oldies at the Siyum Hashas in Eretz Yisroel