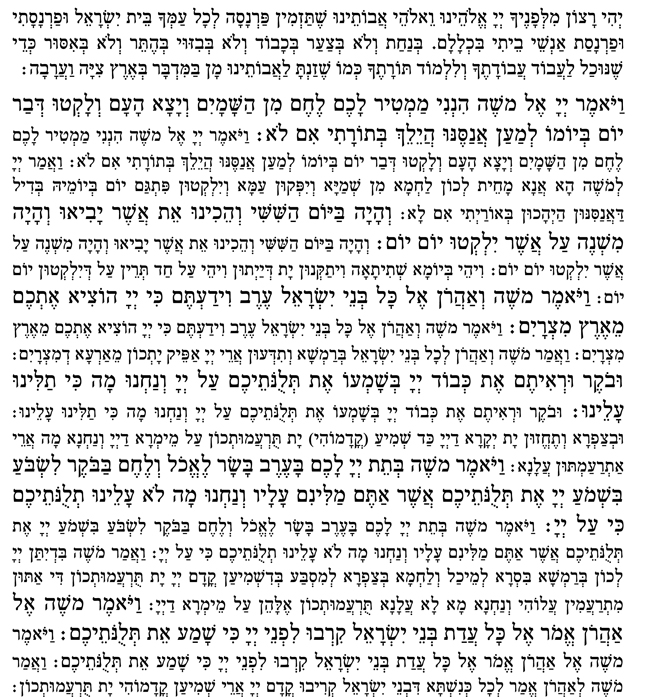 [Links below.] Today, Tuesday of Parshas Beshalach, is a special day. Seforim tell us that it is extremely prudent to utilize this day to pray for parnassah, livelihood, for the next 12 months.

It is a widespread and accepted custom to recite “Parshas Hamonn,” the portion in the Torah that describes the way Hashem provided monn (i.e., parnassah from heaven) for the Yidden in the Midbar. This can be found in Sefer Shemos, Perek 16: 4-36. It is customary to read the pesukim twice and the Targum once, and also to recite a short tefillah for sustenance beforehand. (Click here for the tefillah as well as for the ArtScroll English translation of these pesukim. Click here for the parsha, including the Targum Onkelos.)

Reciting this parsha reminds us that just as Hashem sustained the Jews then, so too, He – and He alone – provides for each and every one of us now.

With Hashgacha Pratis, Divine Providence, Hashem looks after our every need down to the most minute and seemingly mundane detail.

The following is a short yet powerful essay by Rav Yissocher Frand, which teaches us an important lesson:

Parshas Mishpatim begins “And these are the statutes that you shall place before them.” There is a very famous Rashi on the words “And these”. Normally “these” would mean “to the exclusion of others”. But Rashi says that the conjunction “and” adds to what came before (vov mosif), in Parshas Yisro.

The truth of the matter is that this Rashi requires understanding. There is another famous Rashi [Vayikra 25:1] on the words “On Mount Sinai” (mentioned in connection with Shmita) which asks, “What is the connection between Shmitah and Mount Sinai?” Rashi there answers that just like the laws of Shmita were given with all their rules and intricate details at Sinai, so too all other commands were given with their rules and intricate details at Sinai.

If that is the case, what is Rashi adding here, by telling us that the laws of Parshas Mishpatim were given at Sinai? We know that — the whole Torah was given at Sinai!

The Ramba”n says a very interesting thing. According to the Ramba”n, Parshas Mishpatim and the Parsha of the Ten Commandments were said together at the initial meeting of G-d with Moshe on Sinai (prior to the 40 day period when Moshe learned the rest of the Torah). Subsequent to that, Moshe Rabbeinu came down, taught the Jewish people what he had learned from G-d and then went back up to Mount Sinai to learn more.

What emerges from this Ramba”n is that the laws of one ox goring another ox, of digging a hole in the public domain, or paying workers on time, all the mundane intricacies of life have the same status and were given at the same time as the Ten Commandments. Therefore, Rashi is stating something significant.

But, is it not peculiar that almost in the same breath as G-d spoke “I am the L-rd your G-d who took you out from Egypt…”, the foundation of Judaism, He also told us about our responsibilities when we borrow our neighbor’s car?

Why does Parshas Mishpatim rate the same session as “I am the L-rd your G-d”?

Rav Moshe Feinstein, zt”l, said that this comes to teach us that if a person does not keep Parshas Mishpatim (monetary laws), he doesn’t believe in “I am the L-rd your G-d” either.

That is why “I am the L-rd your G-d” is in the same session as the law of how to pay one’s workers.

There was recently a meeting in New York of the Association of Jewish Certified Public Accountants; an organization appropriately called Cheshbon. Rav Schwab told this group that a person who is dishonest in business is a Kofer b’Ikkar (He denies G-d). For the same reason that we just mentioned — that if a person really believed, he would not need to cheat. One cheats because he thinks — “this will get me the parnossah”. Cheating indicates that he does not believe that G-d will take care of him.

Then Rav Schwab continued by saying the following. “You will ask that we see people who cheat a tremendous amount and are nonetheless, successful. Now if parnossah comes from G-d, how can that be?”

Rav Schwab explained that such people’s money comes from the ‘Sitra Achra’, from the forces of impurity in the world, not from G-d. No good will ever come out of the money that comes from the powers of impurity (Kochos HaTumah) in the world. He or his children or someone down the line will never see satisfaction (nachas) from that money.

The ‘test’ of earning a livelihood is not only a test of telling the truth, of not stealing, etc. It is a test of ‘I am the L-rd your G-d’. Daily, we are put to the ‘test’ of whether or not we really believe. If we really, really believe, then there is never a reason to be less than 100% honest in our dealings with other people and with ourselves.