Rav Avraham Reuven Hakohen Katz of Prague (1673), author of Yalkut Reuveni, a collection of kabbalistic material, arranged according to the verses in the Torah.

-Rav Yirmiyahu Lev, the Divrei Yirmiyahu (1811-1874). Born to Rav Binyamin Zev Lev (the Shaarei Torah), he received smicha from Rav Mordechai Banet, the Ravv of Nicholsburg, at the age of 17. He served as Rav of Magendorf from 1844 to 1851, then succeeded his father in Verbau. Finally, he took a position in Ujhel (Hungary).
Rav Moshe Mordechai, succeeded his father, Rav Avraham Yehoshua Heschel, as Kapischnitzer (Kopycznitzer) Rebbe, until his sudden petirah in 1975.

-Rav Shlomo Wolbe, mashgiach of Yeshivas Givat Shaul in Yerushalayims Sanhedria neighborhood (1916-2005). Born in Berlin, Rav Wolbe’s early education was in the Yeshiva of Frankfurt and in Rav Botchko’s yeshiva in Montreux, Switzerland. In the 1930s, he spent several years in Mir, where he became a close talmid Rav Yerucham Levovitz and Rav Chatzkal Levenstein. Rav Wolbe spent the war years in Sweden. After the war, Rav Wolbe moved to Petach Tikvah, where he married the daughter of Rav Avraham Grodzinsky, hy”d, the last mashgiach of Slobodka. Through her, he became a nephew of Rav Yaakov Kamenetsky, and a brother-in-law of Rav Chaim Kreisworth. In 1948, Rav Wolbe became mashgiach at Yeshivah Gedolah of Be’er Yaakov, a position he held for over 35 years. Later, he served as mashgiach in the Lakewood Yeshiva in Eretz Yisrael and he opened Yeshivas Givat Shaul. Rav Wolbe published his first Hebrew work, Alei Shur, to provide today’s yeshiva student with a basic guide to assist him to become a ben Torah.

· Solomon Etting, prominent businessman of Lancaster, Pa., was the first native American Jew to receive a limited authorization to function as a shochet, 1782.
· The world’s worst nuclear accident occurred at the Chernobyl plant in the Soviet Union (now Ukraine). An explosion and fire killed at least 31 people and sent a plume of radioactive fallout over Scandinavia, the British Isles, and the eastern United States. The disaster was ten times more powerful than the atomic bombing of Hiroshima, 1986 (April 26).

Listen: The Daily “Bitachon 4 Life” Burst of Inspiration on Matzav.com: Am I Secure? 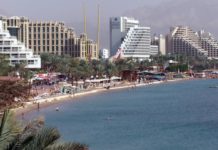