Rav Nesanel Quinn (1910-2005), menahel at Mesivta Torah Vodaas for almost 80 years. Rav Nesanel’s parents’ Reb Zalman Pinchas and Devorah Miriam were neighbors of the Rogochover Rav in Dvinsk, Lithuania, and were childless for 10 years. Upon the advice of Rav Shalom Ber of Lubavich, they moved to America (they were promised a family and arichas yomim; they had 5 children, and she lived to 111 years.) Reb Nesanel was a talmid of Rav Dovid Leibowitz. He later became the talid muvhak of Rav Shraga Feivel Mendelovitz, at Torah Vodaas, and stayed there as an educator. In conjunction with his first yahrtzeit, the sefer Birkas Moadecha on Mesechta Beitzah will be released [along with] a supplement, Zichron Nesanel, which includes short stories abiout Rav Quinn and letters he wrote. 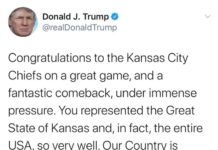 Trump Congratulates The Chiefs Of ‘The Great State Of Kansas.’ The Team Resides In Missouri.