Rav Menachem Nachum Kaplan (Nachumke) of Horodna, Lithuania (1811-1879). When he was nine years old, he lived in the home of Reb Yehuda Leib Ganker and learned with this wealthy man every

morning. Later, he wandered through Lithuania until he came to Amshina, where he studied under Rav Avraham Kahane. Eventually, he was accepted to the Mirrer yeshiva and became close to its mashgiach, Rav Yisrael Heller. He married the daughter of wealthy man, but after a number of years, his father-in-law died. Poverty- stricken, Reb Nachumke took a job as a shamash in the Chevras Shas Beis Midrash in Korodna. However, his fame spread, and many throughout eastern Europe came to observe him and learn from him. Among those was the Chofetz Chaim, then only 15 years old.

· Congregation Bracha V’Shalom of Surinam was dedicated, 1685. It was one of the oldest congregations in America.
· Shul of Rav Yehuda Hachasid burns down with its 40 sifrei Torah,1720. The shul was repaired and used until 1947 when the Jordanians destroyed it again. Today we know its sight and remains as the Hurva.
· Benito Mussolini becomes Premier of Italy, 1922. Though initially pro-Zionist and on good terms with the Jewish population, he is later prodded by Hitler to adopt anti-Semitic policies.
· Episcopal Church cleared Jews of the charge of deicide, 1964 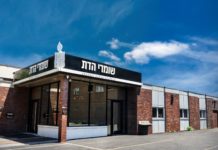 Trump: Positive Signs That The Virus Has Passed Its Peak