The excitement is peaking, thousands of people have signed up to watch the live streaming and join the “Toiras-Thon” broadcast marathon to strengthen education in the Jewish world * Dozens of Gedolei Israel, Rabbonim and Roshei Yeshivos, from Israel, Mexico and the United States – and fifteen singers joined by the Malchus choir and Arale Nachshoni’s orchestra – in a once-in-a-lifetime event * In an exclusive, we bring you the complete schedule for the “Toiras-Thon”

Two months of round-the-clock efforts have already been spent working on the magnificent event that will take place on Monday and Tuesday in the evening (Mexican time) for Mosdot Toiras Eliahu, this after two events that had been planned to honor the donors of this institution were called off – events that were canceled at the very last minute because of the measures adopted at the outbreak of the Covid-19 pandemic, one of which was even cancelled barely three hours before the scheduled start time.

The Director of Mosdot Toiras Eliahu, Rav Daniel Davidsohn, who pioneered and built Toiras Eliahu with his lofty visionary outlook, over the last decade stirred up a revolution in the world of Chinuch for the children of Mexico. True to his innovative and activist style, he coined the motto “Coming . Back . Stronger” and decided that it was precisely now – at a time when all institutions have grown weaker under their financial burdens and everyone is worried about what tomorrow will bring – that a streaming marathon is needed to support the Torah world and Chinuch, and also to raise the spirits of yidden around the world through joy.

“The greatest challenge facing all Jewish kehillos around the world at this time is that of education. Children’s daily routine and curricula suffered drastic changes around the world due to the Covid-19 pandemic. Chinuch is the cornerstone value in the Jewish world and we are bound to it. This is the desire of every yiddishe father – to have children worthy of receiving the Divine blessing and yiddishe nachas,” says Rav Davidsohn.

“In the midst of the pandemic, we saw how the Jewish world comes together to help and care for each other, and so it is important to remember the basic command to “not allow the Torah to be forgotten from the people of Israel”. That is why we launched the “Toiras-Thon”, a highly sophisticated production – Baruch Hashem we were worthy to receive the blessings of dozens of Rabbonim, Gedolei Israel and Roshei Yeshivos, whose words will be heard during the transmission, messages that are very important for every parent and educator to hear at this time.

“We also feel it is good to raise our spirits and increase our joy at this time. There are so many yidden living in anguish, some – lo oleynu – have fallen ill and are in a weakened condition. Also on this plane, we are focused on gladdening, strengthening and touching people’s hearts, during the 10 hours of songs and music to be performed by international singers.”

The “Toiras-Thon” will take place on Monday and Tuesday, 7 and 8 of Tammuz, in a live streaming broadcast, which you can also watch on this site.

The event will also be broadcast in English and Spanish, so that all communities in North and South America can enjoy it.

For the benefit of our readers, we present the full schedule of the “Toiras-Thon”, so that you can arrange the times that you feel most convenient to join the broadcast: 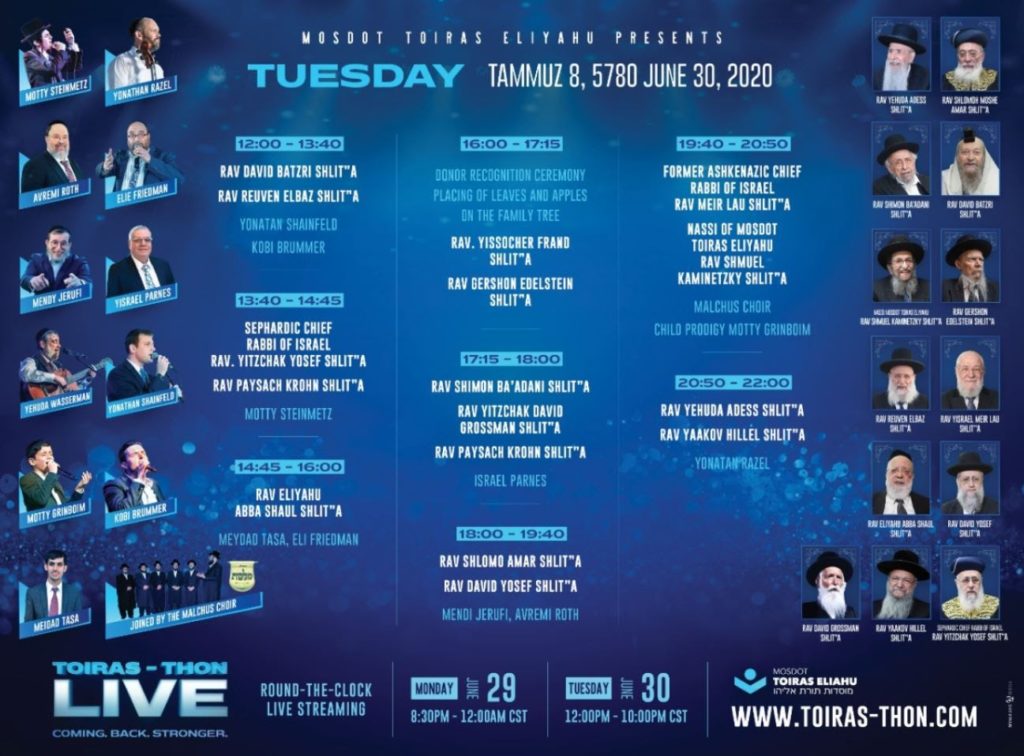